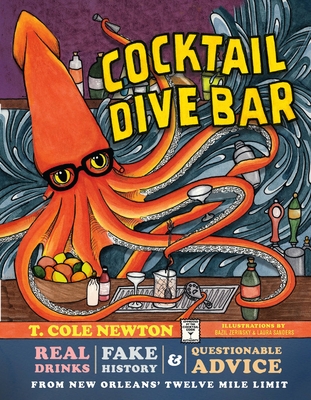 In this irreverent and engaging guide T. Cole Newton, the owner and proprietor of the beloved Louisiana bar Twelve Mile Limit, brings classic and original cocktail recipes to life with a combination of colorful invented histories and real stories, alongside advice drawn from his experience as a young bar owner in the Crescent City.

Lively tongue-in-cheek mini-essays on a range of topics (including such illuminating takes as why the unflappable Maury Povich is the ideal role model for the service industry and how bar owners can work to be community allies) break up this alphabetical compendium of cocktail recipes. Make the book your own by taking recipe notes or coloring in the playful, graphic drawings by Bazil Zerinsky and Laura Sanders. A detailed index of ingredients, infusion recipes, and more makes this an ideal companion for any at-home mixologist or industry professional.

Newton’s book is an original…. The best bars are rarely memorable for the drinks alone, but more so for the conversations that unspool in unexpected ways with strangers seated nearby. Especially if those conversations take a sudden turn toward the unusual or difficult. Newton’s book follows that path.
—Wayne Curtis, The Daily Beast

For creative takes on cocktails galore, plus wisdom gleaned from behind the bar, it's hard to beat the delightful recipes and commentary from irreverent long-time Crescent City drink-slinger T. Cole Newton... Newton's collection brims with personality, stories, and recipes, with thoughtful reflections on anti-racism and gentrification, and combatting sexual harassment in the service industry. Self-effacing humor and dive-y aesthetics make it enjoyable to peruse--and readers can drink artful cocktails while optionally coloring in illustrations from Bazil Zerinsky and Laura Sanders.
—Katie Weed, Shelf Awareness

Born and raised in Washington, DC, T. Cole Newton moved to New Orleans in 2006 to volunteer full-time with AmeriCorps in the wake of Hurricane Katrina. After his service year, Cole took a bartending job at Commander's Palace, culinary alma mater of Paul Prudhomme and Emeril Lagasse. In 2008, he developed and implemented the cocktail program as the first bar manager at the Uptown bistro Coquette. Inspired by that experience, Cole opened his Mid City cocktail dive Twelve Mile Limit in 2010. Among other accolades, Twelve Mile Limit was chosen as the Best Bar in New Orleans by TheManual in 2017. Cole's second bar, the Domino, opened in 2019 on St. Claude Avenue in New Orleans' Bywater neighborhood.

In addition to his work in bars, Cole still volunteers extensively, sitting on the National Board of Directors of the United States Bartending Guild. He enjoys spending time with his wife, Lelia, and son, Felix, and recently beat Super Mario Brothers 3 without a warp whistle for the first time after several decades of trying.