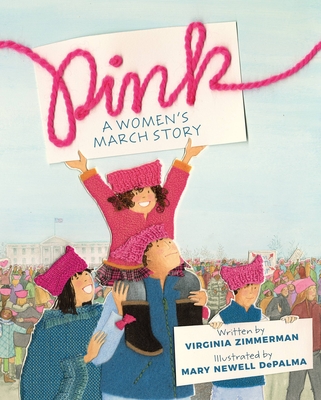 Celebrate the fifth anniversary of the Women's March with this delightful multigenerational picture book about female empowerment.

Lina notices her grandmother knitting with pink yarn and soon learns that she’s making special hats to wear at an important march to celebrate women and their rights. Even though she sometimes feels small, Lina learns how to knit her own pink hat, and her confidence begins to build. When Lina and her family join the Women’s March in Washington, DC, she is energized by the crowd and the sea of pink hats. It’s amazing to see so many people all knitted together! And as Lina marches, she feels much bigger than she ever has before.

Celebrate the importance of the Women’s March with young children in Virginia Zimmerman’s and Mary Newell DePalma’s remarkable and empowering story about one girl’s journey from knitting a hat to making a difference.

“A timely nod to female empowerment that knits together generations of girls and women and raises a hat to activists everywhere.”
—Kirkus Reviews

“Depictions of the variously inclusive crowd, protest signs, and a sea of pink hats combine with Lina’s observations to re-create the event in this intergenerational story of female empowerment.”—Publishers Weekly

"Highly recommended for collections serving youth for its demonstration of feminism, equity, and exploration of gender norms."—School Library Journal

Virginia Zimmerman is a professor of English at Bucknell University as well as a children’s book author. Her middle grade novel, The Rosemary Spell, was published in 2015. This is her first picture book. She grew up in the suburbs of Washington, DC, and now lives with her family in Pennsylvania.

Mary Newell DePalma has illustrated twenty picture books and has authored seven, including the IRA/CBC Children’s Choice winner A Grand Old Tree and the Bank Street College of Education’s Best Books choice Bow-Wow Wiggle-Waggle. In her long and varied illustration career, Mary has drawn just about everything, including eyeballs, cans of shrimp, mice, matchsticks, and dogs in swimsuits. She lives in Boston.