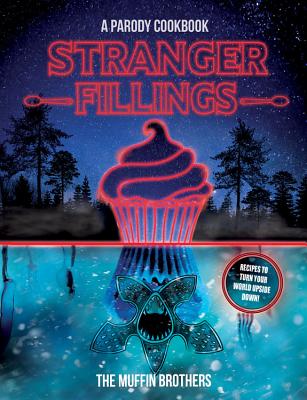 Inspired by the hugely popular Netflix show, Stranger Things, these recipes will turn your world Upside Down!

The hilarious duo behind successful spoof cookbooks such as Baking Bad, Game of Scones, and The Walking Bread is back with Stranger Fillings, a parody cookbook based on THE hit show of 2016, Netflix's Stranger Things. Featuring recipes such as Demogorgon-zola Tartlets, Friends Don't Li(m)e Pie, Baked Brenners, and Barb's Mystery Dip, there will be no shortage of great puns and delicious, edible baked treats.

Stranger Things was one of the most-talked about shows of the year. This delicious parody is the perfect gift to tide fans over until the second season--which hits Netflix in October 2017.

"If a Demogorgon-zola Tartlet sounds delicious, you need the Stranger Fillings: A Parody Cookbook. This hilarious parody cookbook, based on the hit Netflix series, Stranger Things, combines delectable recipes with funny puns and great pictures. Although the names and instructions are filled with jokes and witticism related to Stranger Things, the recipes are real, edible treats."—GeekAlerts.com

After a particularly intense game of Dungeons and Dragons, the Muffin Brothers wandered to the fridge for a late-night snack only to find themselves drawn into a strange netherworld. Here, where salty is sweet and sweet is sour, they battled a host of deliciously abominable treats. Now safely returned home, the brothers spend their time playing less risky games, such as Risk, while periodically regurgitating slug-like creatures. Stranger Fillings is their first (and probably last) book.
Loading...
or
Not Currently Available for Direct Purchase