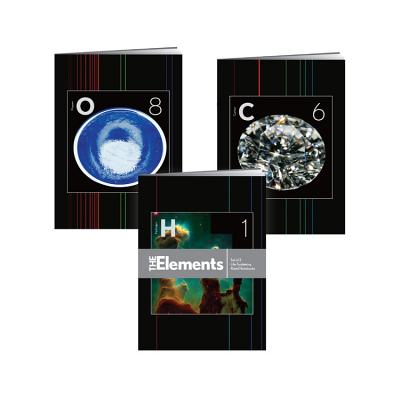 The beautiful, vivid imagery of Theodore Gray's The Elements now graces this irresistible set of 3 paper-bound notebooks, perfect for students and science enthusiasts of all ages.
Each of the 3 notebooks in this set features a different stunning image of an element of the periodic table on its cover, drawn from the iconic photographs found in The Elements. These three elements--Hydrogen, Oxygen, and Carbon--are the most essential and life-sustaining atoms in the universe. Their imagery is sure to inspire you to organize the daily chaos sustained in your own life. Approach everything from grocery lists and packing lists, to homework assignments, daydreams, doodles, and all those dreadful To-Do's with a renewed sense of order and awe for the world around you.
This set includes:
3 saddle stitched 48-page notebooks.
Ivory woodfree paper.
Matte varnish covers.
Packaged together with a belly band.

Theodore Gray is the author of the recently released Reactions as well as The Elements, Molecules and Theodore Gray's Completely Mad Science: Experiments You Can Do At Home, But Probably Shouldn't. He is the creator of the bestselling iPad apps "Elements" and "Molecules," which have both been named "App of the Week" by Apple and was Director of "Disney Animated" (also honored by Apple as "iPad App of the Year"). Gray appeared on stage with Steve Jobs several times in his capacity as a software creator. He also co-founded Wolfram Research, Inc., makers of the widely-used software Mathematica and the Wolfram Alpha website. He lives in Urbana, Illinois.


Nick Mann is the photographer of The Elements: A Visual Exploration of Every Known Atom in the Universe and Molecules: The Elements and the Architecture of Everything. Aside from having photographed more elements, molecules, and reactions than probably anyone in the world, he is an accomplished landscape, sports, and event photographer. He also lives in Urbana, Illinois.
or
Buy Here
Copyright © 2020 American Booksellers Association