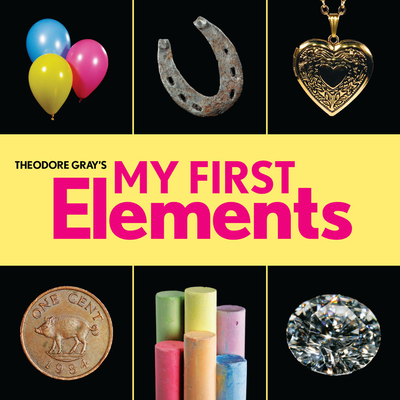 Introduce Baby to the wonderful, colorful elements that make up his or her world!
This board book for babies, ages 6 months to 3 years, features big, bold, and bright photography from Theodore Gray's bestselling adult book The Elements, paired with delightful, baby-friendly text. My First Elementsincludes 10 elements, one per spread. Each spread features a big photograph of the element on one page, such as an iron horseshoe or nugget of gold. The opposite page shows photographs of the places in baby's world where the element is found from balloons for helium to a swimming pool for chlorine to seaweed for iodine.

Theodore Gray is the author of the recently released Reactions as well as The Elements, Molecules and Theodore Gray's Completely Mad Science: Experiments You Can Do At Home, But Probably Shouldn't. He is the creator of the bestselling iPad apps "Elements" and "Molecules," which have both been named "App of the Week" by Apple and was Director of "Disney Animated" (also honored by Apple as "iPad App of the Year"). Gray appeared on stage with Steve Jobs several times in his capacity as a software creator. He also co-founded Wolfram Research, Inc., makers of the widely-used software Mathematica and the Wolfram Alpha website. He lives in Urbana, Illinois.
Nick Mann is the photographer of The Elements: A Visual Exploration of Every Known Atom in the Universe and Molecules: The Elements and the Architecture of Everything. Aside from having photographed more elements, molecules, and reactions than probably anyone in the world, he is an accomplished landscape, sports, and event photographer. He also lives in Urbana, Illinois.
Loading...
or support indie stores by buying on