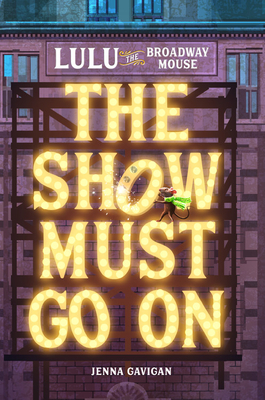 The Show Must Go On (The Broadway Mouse Series)

Lulu's show has just received its closing notice. Lulu and the rest of the company are devastated. Lulu takes readers back in time to just after she made her onstage debut and of Lulu and Jayne rising in popularity and esteem. However, there is one critic who is determined to break Lulu's career. With additional casting drama happening with Jayne, Amanda, and new girl Olivia, the news about the show closing comes as a real blow to everyone. When Benji, Lulu's brother, comes up with an idea on how to boost ticket sales, the company members hit the streets, desperate to save the show from closing. But will Lulu and Stella be able to stop the nasty critic from completely ruining Lulu's dreams and those of the rest of the cast?

"Readers, especially young theater geeks who love backstage Broadway stories with all of their insider talk, will enjoy this sweet and charming story."—Booklist

Jenna Gavigan, a fourth generation New Yorker, grew up dreaming of Broadway. At age sixteen she made her Broadway debut in Gypsy, opposite Bernadette Peters. Since then she's appeared in a half-dozen films, on more than a dozen television shows, and on east and west coast stages, most recently Off-Broadway in the world premiere of Straight. Jenna graduated from Columbia University with a BA in Creative Writing, where she focused on fiction, television, and screenwriting. She lives in a teeny tiny Manhattan apartment with her husband, Kevin.
Loading...
or
Not Currently Available for Direct Purchase