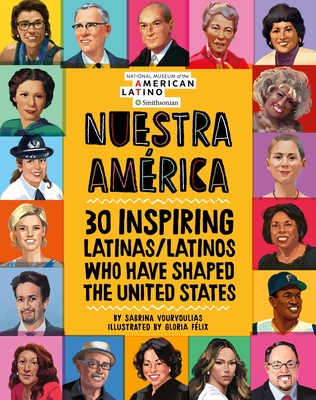 30 Inspiring Latinas/Latinos Who Have Shaped the United States

Celebrate 30 influential Latinas/Latinos/Latinxs in U.S. history with Nuestra América, a fully-illustrated anthology from the Smithsonian Latino Center.
Nuestra América highlights the inspiring stories of thirty Latina/o/xs throughout history and their incredible contributions to the cultural, social, and political character of the United States.
The stories in this book cover each figure's cultural background, childhood, and the challenges and opportunities they met in pursuit of their goals. A glossary of terms and discussion question-filled reading guide, created by the Smithsonian Latino Center, encourage further research and exploration. Twenty-three of the stories featured in this anthology will also be included in the future Molina Family Latino Gallery, the first national gallery dedicated to Latina/o/xs at the Smithsonian.
This book is a must-have for teachers looking to create a more inclusive curriculum, Latina/o/x youth who need to see themselves represented as an important part of the American story, and all parents who want their kids to have a better understanding of American history. Featuring beautiful portraits by Gloria Félix, this is a book that children (and adults) will page through and learn from again and again.
Nuestra América profiles the following notable figures:
Sylvia Acevedo, Luis Álvarez, Pura Belpré, Martha E. Bernal, Julia de Burgos, César Chávez, Sandra Cisneros, Roberto Clemente, Celia Cruz, Olga E. Custodio, Óscar de la Renta, Jaime Escalante, Macario García, Emma González, Laurie Hernández, Juan Felipe Herrera, Dolores Huerta, Jennifer Lopez, Xiuhtezcatl Martínez, Sylvia Méndez, Lin-Manuel Miranda, C. David Molina, Rita Moreno, Ellen Ochoa, Jorge Ramos, Sylvia Rivera, María Elena Salinas, Sonia Sotomayor, Dara Torres, and Robert Unanue.

Praise For Nuestra América: 30 Inspiring Latinas/Latinos Who Have Shaped the United States…

Vibrant illustrations and a lively narrative come together to spotlight the stories of 30 Latinas and Latinos. These men and women have worked in a wide variety of fields, overcome great obstacles, and have contributed to the world in significant ways. Trailblazers include engineer Sylvia Acevedo, clinical psychologist Martha E. Bernal, baseball player Roberto Clemente, and U.S. Army Staff Sergeant Marcario García. Three to four pages are dedicated to each profile, with one page featuring an illustrated portrait of the individual against a colorful background. The text provides information about the early life of each person along with personal milestones, such as education, paths to careers, and accomplishments. Their struggles and contributions to the community are also listed. Each profile flows smoothly; the fascinating narratives are conversational in tone. Readers will gain an understanding of the obstacles these individuals faced as well as the role their heritage and culture played in their lives. A glossary is included as well as a reader's guide that includes a QR code. Discussion questions encourage thought and action with suggested activities.
VERDICT: An excellent nonfiction title focusing on luminous Latinas and Latinos, whose stories are sure to encourage and inspire hope in young readers everywhere.—School Library Journal, starred review

While this book will educate all readers, it importantly provides Latinx American children with inspirational role models from a diverse array of professions. A valuable title to have on the shelf.
—Booklist

Sabrina Vourvoulias is an award-winning Latina news editor, writer, and digital storyteller. An American citizen from birth, she grew up in Guatemala during the armed internal conflict and moved to the United States when she was fifteen. Her journalism and editing have garnered an Emmy, and an Edward R. Murrow award, as well as multiple José Martí, Keystone, and New York Press Association awards.
In addition to publishing short fiction and poetry, she is also the author of Ink, which was named to Latinidad's Best Books of 2012. She lives in Pennsylvania with her husband, daughter, and a dog who believes she is the one ring to rule them all.
Gloria Félix was born and raised in Uruapan, a beautiful small city in Michoacán, Mexico, one of her biggest inspirations when it comes to Art. Her favorite things to do growing up were drawing, watching cartoons, and eating, which still are some of her favorite things to do. Currently, she lives and paints in Los Angeles.
Loading...
or support indie stores by buying on