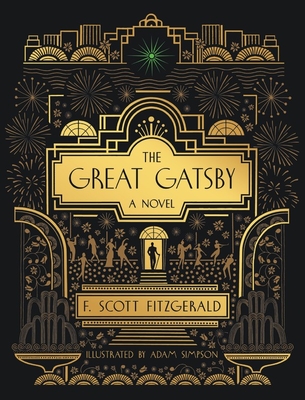 A new edition of the original 1925 edition of F. Scott Fitzgerald's classic Great American novel, beautifully illustrated by award-winning artist Adam Simpson.   Widely considered to be the greatest American novel of all time, The Great Gatsby is the story of the wealthy, quixotic Jay Gatsby and his obsessive love for debutante Daisy Buchanan. It is also a cautionary tale of the American Dream in all its exuberance, decadence, hedonism, and passion.   First published in 1925 by Charles Scribner's Sons, The Great Gatsby sold modestly and received mixed reviews from literary critics of the time. Upon his death in 1940, Fitzgerald believed the book to be a failure, but a year later, as the U.S. was in the grips of the Second World War, an initiative known as Council on Books in Wartime was created to distribute paperbacks to soldiers abroad. The Great Gatsby became one of the most popular books provided to regiments, with more than 100,000 copies shipped to soldiers overseas. By 1960, the book was selling apace and being incorporated into classrooms across the nation. Today, it has sold over 25 million copies worldwide in 42 languages.   This exquisitely rendered edition of the original 1925 printing reintroduces readers to Fitzgerald's iconic portrait of the Jazz Age, complete with specially commissioned illustrations by Adam Simpson that reflect the gilded splendor of the Roaring Twenties.

F. Scott Fitzgerald (1896 - 1940) is widely regarded as one of the greatest American writers of the 20th century. He completed four novels in his lifetime, including This Side of Paradise, The Beautiful and Damned, The Great Gatsby, and Tender is the Night, as well as a fifth unfinished work, The Last Tycoon, which was published posthumously. He is also the author of numerous short stories.   Adam Simpson studied at Edinburgh College of Art, Rhode Island School of Design and the Royal College of Art in London. His work encompasses a mixture of commissioned and self-initiated projects. Adam has contributed to exhibitions and book fairs in London, New York, Edinburgh and Bologna, as well as numerous Japanese art museums. Winner of the American Illustration 40 Award, his work has been shortlisted for a British Design Award and he was included in the Art Directors Club Young Guns awards. Adam's clients range from newspapers and magazines, to publishing and design agencies worldwide, including BAFTA, the SFMOMA, the New Yorker, and the New York Times. He works from his studio in south east London, overlooking the Thames.
Loading...
or support indie stores by buying on