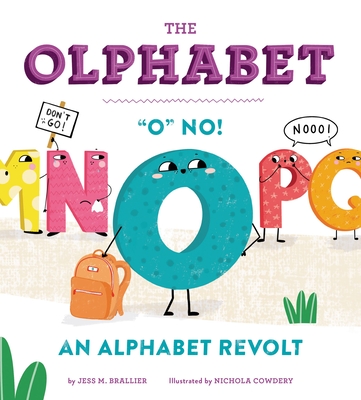 "O" No! An Alphabet Revolt

The letter "O" has had it with always being in the middle! So she imagines moving, instead, to the head of the line. Enough with the alphabet—they'll call it the olphabet! While being first has its obvious perks, "O" begins to realize that much would also be lost, including friends. After going from "A" to "Z," "O" will find the right place to be.


Praise For The Olphabet: "O" No! An Alphabet Revolt…

"The wordplay is clever and funny, and young readers are sure to be tickled by O’s cheekiness and disruption of the status quo. Cowdery’s cheerful illustrations feature expressive faces and distinctive colors and patterns for each letter, creating wonderful scenes."—School Library Journal

Jess M. Brallier is a book publisher and author of nearly forty titles for both adults and children. With stints at Little Brown, Abrams Books, and his own children's imprint with Penguin, Brallier has worked with authors from Anne Morrow Lindbergh to Jeff Kinney, and authored books about subjects from hot dogs to Albert Einstein. Considered a well-rounded sort, Brallier is especially attracted to the letter O.
From a young age Nichola Cowdery kept herself busy constantly drawing and creating. Much to her parents dismay there wasn't a surface in the house that Nichola didn't like to draw on. She went on to study Graphic Design at Southampton University and works as a full-time illustrator. She currently lives in London with her family and two cats.