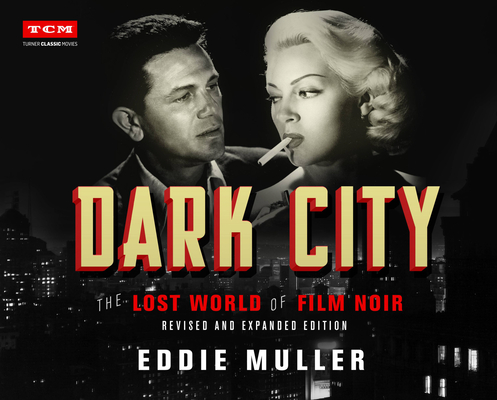 This revised and expanded edition of Eddie Muller's Dark City is a film noir lover's bible, taking readers on a tour of the urban landscape of the grim and gritty genre in a definitive, highly illustrated volume.

Dark City expands with new chapters and a fresh collection of restored photos that illustrate the mythic landscape of the imagination. It's a place where the men and women who created film noir often find themselves dangling from the same sinister heights as the silver-screen avatars to whom they gave life. Eddie Muller, host of Turner Classic Movies' Noir Alley, takes readers on a spellbinding trip through treacherous terrain: Hollywood in the post-World War II years, where art, politics, scandal, style -- and brilliant craftsmanship -- produced a new approach to moviemaking, and a new type of cultural mythology.

“With its extensive bibliography, index, lavish photos, and dozens of films ranging from the obscure to the well-known, this title will please newcomers to noir and hard-core fans who can’t get enough of Muller’s Noir Alley intros and outros.”—Library Journal

"The book is general enough to appeal to people just beginning to learn about what the French dubbed 'dark movies” but detailed enough to teach even the most ardent film fans things they didn’t know."—The Virginian-Pilot

“Fans will recognize his signature style here, heavy on the self-conscious, tough-guy slang. But the illustrations, from rare posters to vintage stills, are thrilling. And his portrait of noir itself can’t be topped.”—NY Daily News

“I can safely place my hand on my heart and say there is no writer/expert on the subject of film noir that I’d rather read than Eddie Muller…And here – once again — is his magnum opus: the best book written on the subject of film noir and, what’s more, re-appearing in a very handsome, lavishly illustrated revised edition…  anyone with the slightest interest in the film noir idiom needs this volume on their the bookshelves – it is as simple as that.”—Barry Forshaw, Crime Time

"This revised and expanded edition is a thoroughly entertaining journey of the genre, with more twists than Mulholland Drive. Leave it to Muller — author, film historian, and TCM host — to be your five-star guide. His writing style is fedora-fine, perfectly nuanced and factual to the utmost degree."—EDGE Media

“The author is not only an incisive historian, but also a highly effective entertainer...With its smartly written text and abundance of fabulous photos and poster art, you'll want to keep the handsome "Dark City" on your coffee table, so you can continually thumb through its informative content.”—Pop Culture Classics

Eddie Muller, aka the "Czar of Noir," is the host of TCM's Noir Alley franchise, and the prolific author of novels, biographies, movie histories, plays, and films. He also programs and hosts the "Noir City" film festival series, curates museums, and provides commentary for television, radio, and DVDs. As founder of the Film Noir Foundation, Muller has been instrumental in restoring and preserving more than thirty lost noir classics. He resides in Alameda, CA.
Loading...
or support indie stores by buying on