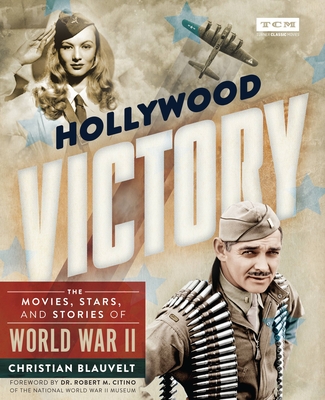 From the Turner Classic Movies Library: Film and history buffs alike will enjoy this engrossing story of Hollywood's involvement in World War II, as it's never before been told.

Remember a time when all of Hollywood—with the expressed encouragement and investment of the government—joined forces to defend the American way of life? It was World War II and the gravest threat faced the nation, and the world at large. Hollywood answered the call to action.
This is the riveting tale of how the film industry enlisted in the Allied effort during the second World War—a story that started with staunch isolationism as studios sought to maintain the European market and eventually erupted into impassioned support in countless ways. Industry output included war films depicting battles and reminding moviegoers what they were fighting for, "home-front" stories designed to boost the morale of troops overseas, and even musicals and comedies that did their bit by promoting the Good Neighbor Policy with American allies to the south. Stars like Carole Lombard—who lost her life returning from a war bond-selling tour—Bob Hope, and Marlene Dietrich enthusiastically joined USO performances and risked their own health and safety by entertaining troops near battlefronts; others like James Stewart and Clark Gable joined the fight themselves in uniform; Bette Davis and John Garfield created a starry haven for soldiers in their founding of the Hollywood Canteen. Filmmakers Orson Welles, Walt Disney, Alfred Hitchcock, and others took breaks from thriving careers to make films aiming to shore up alliances, boost recruitment, and let the folks back home know what beloved family members were facing overseas. Through it all, a story of once-in-a-century unity—of a collective need to stand up for humanity, even if it means risking everything—comes to life in this engrossing, photo-filled tale of Hollywood Victory.

"Comprehensively researched, thoughtfully communicated, and supported by a wealth of sources and high quality images, Hollywood Victory serves as a premier authority on Hollywood’s unprecedented alliance with the U.S. government and involvement in World War II."—The Conskipper Review

"Author Christian Blauvelt puts together an intelligent and savvy history of the period which breaks new ground. He steps out from behind telling the same stories about the same movies and provides some of the historical context which has lacked over the passage of time. "—JourneysInClassicFilm.com

"Hollywood Victory looks at the industry’s contributions to the war effort through a wide lens. "—Shepherd Express

“Blauvelt's book is a well-researched and heavily illustrated account of those years in the movie business. He takes the stories told in dozens of other histories and memoirs and synthesizes them into a coherent and easy-to-follow narrative about the war years.”
—Military.com

"Hollywood Victory by Christian Blauvelt is nothing short of breakthrough story telling-with a highly perceptive concept and design. It is chuck full of an [amassive] amount of trivia and historical information along with some immersive insight as to what went on in front and behind the scenes of Hollywood during a country and it’s allies-our allies at war."—Chris Nersinger

"Blauvelt has done a seamless job of weaving all of these vignettes of Hollywood history into a cohesive and informative package. Or to put it in 1940s lingo, this book is just swell."—Newsday

Christian Blauvelt is an entertainment journalist, who serves as the managing editor of leading film and TV industry website IndieWire. He regularly appears on CBS New York to give previews of upcoming films and awards season analysis; has hosted films on Turner Classic Movies; and has presented at South by Southwest and San Diego Comic-Con. Blauvelt is the author of books including Cinematic Cities: New York. He lives in New York City.
Loading...
or support indie stores by buying on