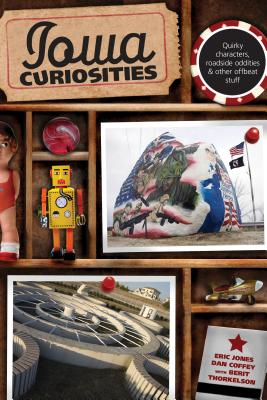 Your round-trip ticket to the wildest, wackiest, most outrageous people, places, and things the Hawkeye State has to offer!

Dan Coffey is best known as public radio's "Dr. Science." While in graduate school, Coffey co-founded an absurdist theater group who called themselves "Duck's Breath Mystery Theater." After receiving his MFA in Playwriting from the University of Iowa in 1975, he and his comedy troupe moved to San Francisco, where they remained for the next twelve years, performing in night clubs and college campuses. Coffey and fellow Duck Merle Kessler developed the "Ask Dr. Science" show, which has been a staple on public radio since 1983. Coffey and Kessler have written two Dr. Science books, "Dr. Science's Big Book of Science" (Contemporary Books, 1985), and Dr. Science's Big Book of Science, Simplified (William Morrow, 1992). Dr. Science also was the star of a PBS special and a Fox television series.Coffey makes his home in Iowa City, Iowa, where he continues to write in a humorous vein. Co-author Eric Jones is a recent graduate of The University of Iowa's Nonfiction Writing Program. A personal essayist and travel writer, he also works as a mover and as a nursing assistant at the University of Iowa Hospital's Burn Treatment Center.
Loading...
or support indie stores by buying on