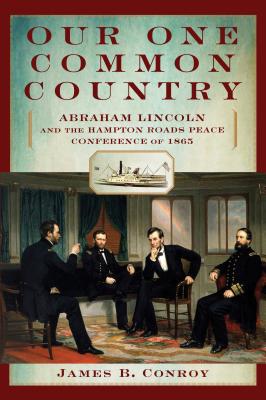 Our One Common Country

Abraham Lincoln and the Hampton Roads Peace Conference of 1865

Our One Common Country explores the most critical meeting of the Civil War. Given short shrift or overlooked by many historians, the Hampton Roads Conference of 1865 was a crucial turning point in the War between the States. In this well written and highly documented book, James B. Conroy describes in fascinating detail what happened when leaders from both sides came together to try to end the hostilities. The meeting was meant to end the fighting on peaceful terms. It failed, however, and the war dragged on for two more bloody, destructive months. Through meticulous research of both primary and secondary sources, Conroy tells the story of the doomed peace negotiations through the characters who lived it. With a fresh and immediate perspective, Our One Common Country offers a thrilling and eye-opening look into the inability of our nation's leaders to find a peaceful solution. The failure of the Hamptons Roads Conference shaped the course of American history and the future of America's wars to come.

James B. Conroy practices law in Boston. He previously served as a Senate and House press secretary and speechwriter in Washington, D.C., as well as an administrative assistant (chief of staff) for a New York City congressman. His legal writing has been published in the Massachusetts Law Review and the Massachusetts Lawyers' Weekly.
Loading...
or
Not Currently Available for Direct Purchase