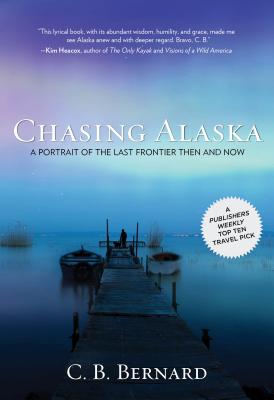 A Portrait of the Last Frontier Then and Now

Alaska looms as a mythical, savage place, part nature preserve, part theme park, too vast to understand fully. Which is why C. B. Bernard lashed his canoe to his truck and traded the comforts of the Lower 48 for a remote island and a career as a reporter. He soon learned that a distant relation had made the same trek northwest a century earlier. Captain Joe Bernard spent decades in Alaska, amassing the largest single collection of Native artifacts ever gathered, giving his name to landmarks and even a now-extinct species of wolf. C. B. chased the legacy of this explorer and hunter up the family tree, tracking his correspondence, locating artifacts donated to museums, and finding his journals at the University of Alaska at Fairbanks. Using these journals as guides, he threw himself into the state once known as Seward's Folly, boating to remote islands, hiking distant forests, hunting and fishing the pristine environment, forming a landscape view of the place that had lured him and Uncle Joe, both men anchored beneath the Northern Lights in freezing, far-flung waters, separated only by time. Here, in crisp, crystalline prose, is his moving portrait of the Last Frontier, then and now.

C. B. Bernard has worked as a newspaper editor, magazine and public radio journalist, senior copywriter at an advertising agency, and marketing and communications specialist. He has been a lecturer at the University of Southern Maine's Stonecoast Writers Conference, a featured writer at the Boston Fiction Festival, and a featured speaker at the University of Massachusetts Lowell's Spring Speakers Series. The Alaska Press Club awarded his series on the oyster farms of Kachemak Bay, and Newsweek columnist Eleanor Clift judged his column about life in Alaska as best in the state. The author of a travel guide to New England bike trails, he has also written extensively for Alaskan Southeaster, Alaska Business Monthly, Pacific Fishing, and Professional Mariner magazine. He lives in Portland, Oregon.
Loading...
or
Not Currently Available for Direct Purchase