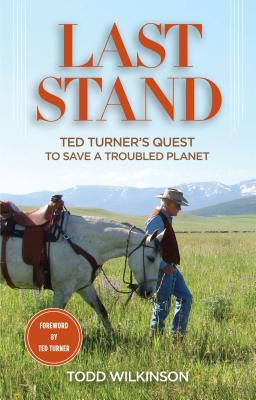 Ted Turner's Quest to Save a Troubled Planet

Entrepreneur and media mogul Ted Turner has commanded global attention for his dramatic personality, his founding of CNN, his marriage to Jane Fonda, and his company's merger with Time Warner. But his green resume has gone largely ignored, even while his role as a pioneering eco-capitalist means more to Turner than any other aspect of his legacy. He currently owns more than two million acres of private land (more than any other individual in America), and his bison herd exceeds 50,000 head, the largest in history. He donated $1 billion to help save the UN, and has recorded dozens of other firsts with regard to wildlife conservation, fighting nukes, and assisting the poor. He calls global warming the most dire threat facing humanity, and says that the tycoons of the future will be minted in the development of green, alternative renewable energy. Last Stand goes behind the scenes into Turner's private life, exploring the man's accomplishments and his motivations, showing the world a fascinating and flawed, fully three-dimensional character. From barnstorming the country with T. Boone Pickens on behalf of green energy to a pivotal night when he considered suicide, Turner is not the man the public believes him to be. Through Turner's eyes, the reader is asked to consider another way of thinking about the environment, our obligations to help others in need, and the grave challenges threatening the survival of civilization.

Todd Wilkinson has been a professional journalist and author for more than twenty-five years, with assignments that have taken him around the world. He is author of several books, including the critically acclaimed Science under Siege: the Politicians' War on Nature and Truth.
Loading...
or
Not Currently Available for Direct Purchase