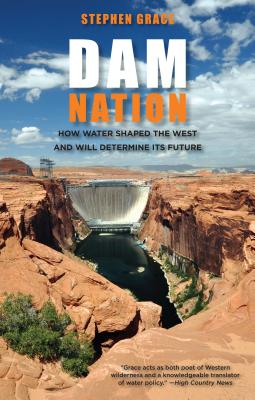 In the scramble to claim water rights in the West during the fevered days of early emigration and expansion, running out of water was rarely a concern, and the dam building fever that transformed the West in the 19th and 20th centuries created a map of the region that may be unsustainable. Throughout the arid American West, metropolitan areas such as Los Angeles, Phoenix, Las Vegas and Denver need water. These cities are growing, but water supplies are dwindling. Scientists agree that the West is heating up and drying out, leading to future water shortages that will pose a challenge to existing laws. Dam Nation looks first to the past, to the stories of the California gold rush and the earliest attempts by men to shape the landscape and tame it, takes us to the "Great American Desert" and the settlement of the west under the theory that "rain follows the plow," and then takes on the ongoing legal and moral battles in the West. Author Stephen Grace, is a novelist, a storyteller, and the author of several non-fiction books on Colorado. He weaves the facts into a compelling narrative that informs, entertains, and tells an important story.

Stephen Grace's employment has ranged from deckhand on Mississippi riverboats to neuropsychological research assistant to whitewater rafting guide. For the past several years he has worked as a travel industry professional designing and leading trips on five continents. A resident of Colorado, he spends his free time exploring its mountains and rivers.

A concerned, observant “citizen of the West” spins tales of our chronic mismanagement of the only natural resource for which there’s no alternative: water.

The American West’s relentless aridity doomed civilizations for centuries. Nevertheless, thanks to gold fever, Manifest Destiny and the railroads, the Great American Desert began filling up with people, entirely, it seems, without regard for limits to expansion imposed by the lack of precipitation. Today, we know better than to think “rain follows the plow,” but we don’t appear even close to developing a water sustainability program to keep cities like Las Vegas, Denver and Phoenix from drying up. Claiming no special expertise—indeed, the West’s water story cuts across too many disciplines for even specialists to wholly absorb—Grace (Shanghai: Life, Love and Infrastructure in China's City of the Future, 2010, etc.) has nevertheless traveled widely and read broadly. He effectively, even humorously at times, captures the highlights of the West’s liquid history: the engineering wonders (and unintentional consequences) of New Deal–era dam projects; the tortuous web of law, regulations, treaties and compacts that govern Western water rights; and the political, bureaucratic and industrial power grabs that have accompanied all reclamation projects. The author covers a lot of territory: geologist John Wesley Powell’s prescient observations and recommendations for watershed communities; the hydro-skullduggery that accounts for the city of Los Angeles; the winding tale of the Colorado, “the world’s most heavily litigated river”; the ongoing depletion of the Ogallala Aquifer; the rise and demise of the Bureau of Reclamation; the industrial and agricultural tainting of our water; and our meager efforts to conserve or create more by desalination and cloud seeding. Westerners long accustomed to the region’s water scarcity will discover nothing new here, but Grace’s dispatches will likely strike those east of the 100th meridian as from another country.

Though squarely on the side of environmental prudence, Grace is neither preachy nor accusatory in his descriptions of an impending tragedy and the need for action.

No one reading this book will ever look at a glass of water the same way again—especially if they live in the West.

Water determined how the West was settled and populated and, as the author graphically chronicles, will influence how this massive western third of the United States will be challenged in the future. As the mountain snowpack diminishes, thriving cities and communities must prudently reassess their water needs and practices and control their own supplies, especially those in sun belt states and arid zones.

Stephen Grace presents an engaging, easily palatable crash-course in the complex history of water in the West. Many factors are at work—politics, railroads, agriculture, city-building, mining, recreation, and the energy industry—making water rights a complex issue as the rivers flow southward.
--Karl Kunkel