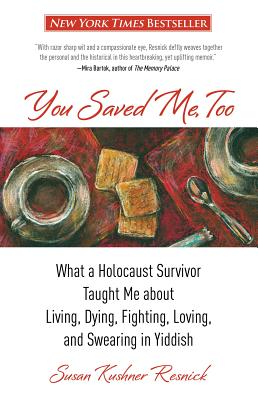 You Saved Me, Too

What a Holocaust Survivor Taught Me about Living, Dying, Fighting, Loving, and Swearing in Yiddish

Aron Lieb approached Sue Resnick at a Jewish Community Center fifteen years ago and found a companion and soul mate who was steadfastly by his side for the rest of his life. You Saved Me, Too is the incredible story of how two people shared the hidden parts of themselves and created a bond that was complicated, challenging, but ultimately invaluable. Sue was first attracted to Aron's warmth and wit, such a contrast to his tragic past and her recent battle with postpartum depression. Soon she would be dealing with his mental illness, fighting the mainstream Jewish community for help with his care, and questioning her faith. The dramatic tension builds when Sue promises not to let Aron die alone. This book chronicles their remarkable friendship, which began with weekly coffee dates and flourished into much more. With beautiful prose, it alternates between his history, their developing friendship, and a current health crisis that may force them to part.

Susan Kushner Resnick teaches creative nonfiction at Brown University. Her most recent narrative nonfiction book, Goodbye Wifes and Daughters (University of Nebraska Press, cloth 2010, paper 2011), won a gold medal for nonfiction from the Independent Publisher's Book Awards and was a finalist for the Montana Book Award, the Western Writers of America Contemporary Nonfiction Award and the High Plains Book Awards. Her first book, Sleepless Days: One Woman's Journey Through Postpartum Depression (St. Martin's Press, cloth 2000, paper 2001), was the first PPD memoir by an American author. She's been a journalist for 26 years, years, reporting most recently for The Providence Journal. She's been published The New York Times magazine, The Boston Globe, Parents, Utne Reader and Montana Quarterly, among other publications. She was nominated for a Pushcart Prize in 2001 and her work was listed as a notable essay in The Best American Essays 1999. She lives in Massachusetts with her husband and two teenagers.
Loading...
or
Not Currently Available for Direct Purchase