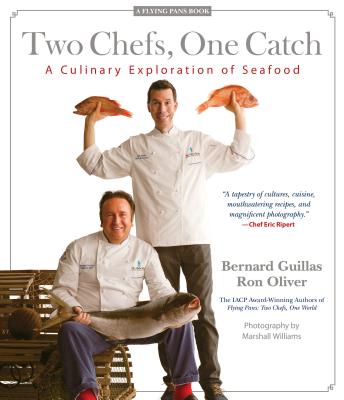 A Culinary Exploration of Seafood

Following the success of their self-published, IACP award-winning Flying Pans: Two Chefs, One World, Chefs Ron Oliver and Bernard Guillas of the prestigious and popular Marine Room in La Jolla, California, are back at it again with this stunning seafood cookbook. The more than 120 delectable fish, shellfish, and crustacean recipes are organized by species and accompanied by expert tips on selection and preparation as well as engaging anecdotes and stories conveying the Chefs' culinary expertise and insatiable cultural curiosity. With an eye to making cooking seafood both easy and rewarding, the recipes are high in nutrition, low in fat, and astounding in flavor. Inspired by their travels around the globe, these passionate chefs have created such imaginative combinations as: Ahi Tuna Tiger Eye with Spicy Cashew Sauce, Quick Easy Bouillabaise, Shrimp Andouille Lollipops, Leek Parsley Coated Halibut with Oven Roasted Tomatoes, and more. Each dish is beautifully photographed in full color by top photographer Marshall Williams.