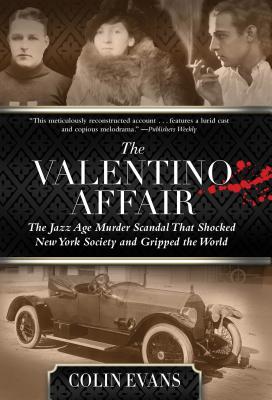 In 1922, Rudolph Valentino was one of the most famous men alive. But few knew that the star had a dirty secret that he desperately wanted to bury. The lurid tale began a decade earlier when former Yale football star and notorious playboy Jack de Saulles made headlines across three continents by pursuing the beautiful young Chilean heiress Blanca Err zuriz, known as the Star of Santiago. After the birth of their son, though, the marriage soured. Jack was going after every chorus girl on Broadway, claiming that Blanca had banished him from their bed. By 1916, Blanca wanted a divorce, rare then and even more so in a wealthy, powerful Catholic family. Enter Valentino, then still known as Rodolfo Guglielmi, a professional dancer in New York City, famous for the Argentinean tango. Blanca discovered that her husband had been sleeping with Joan Sawyer, Rodolfo's dance partner, so she set about cultivating the hungry young performer. Whether Blanca and Guglielmi became lovers remains unclear, but the ambitious Italian gave evidence on her behalf in divorce court. Furious, de Saulles had Guglielmi arrested on trumped-up vice charges, tarnishing the dancer's reputation. But Blanca was fighting bigger battles. De Saulles's family had been pulling strings, persuading the courts to grant him partial custody of their child. When it appeared that he wasn't going to return the boy to his mother's care, Blanca exploded. On a sweltering August night in 1917, she drove to Jack's mansion and shot him dead. Several people witnessed the act, but Blanca's family hired the best defense lawyer around, who salvaged de Saulles's reputation and made Blanca out to be a saint. During the "most sensational trial of the decade," millions devoured the juicy details of how a high-society marriage violently unraveled. Guglielmi, desperate to avoid further poisonous publicity, fled to California, changed his name to Rudolph Valentino, and the rest is Hollywood history.

Colin Evans has written for the Fort Lauderdale Sun-Sentinel, History magazine, and the medical journal Scope. The author of 16 books on forensics and true crime he lives near Bath, England.
Loading...
or
Not Currently Available for Direct Purchase