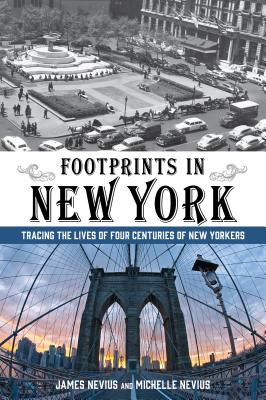 Tracing the Lives of Four Centuries of New Yorkers

New York City experts James and Michelle Nevius explore the lives of two dozen iconic New Yorkers, including Founding Father Alexander Hamilton, Central Park architects Frederick Law Olmsted and Calvert Vaux, business titan JP Morgan, and music legend Bob Dylan. Beginning with the oldest building in NYC, a 1652 farmhouse in Brooklyn, and journeying all the way to the rebuilding of the World Trade Center, the book follows in the footsteps of notable New Yorkers across all five boroughs. How did the city help Abraham Lincoln win the presidency? Where in Manhattan did Edgar Allan Poe compose "The Raven"? How was an area like Soho experienced by Mary Todd Lincoln, or Jane Jacobs, or Woody Allen? One part history and one part personal narrative, Footprints in New York traces the city's story from the Dutch village below Wall Street to the Mean Streets of Martin Scorsese, creating a different way of looking at the past. Visit www.footprintsinny.com for more.

Authors of Inside the Apple, James and Michelle Nevius have been putting their historical knowledge to work leading guided walking tours of New York City since 2000. Every tour is a mix of architecture, history, art, and culture, with a focus on uncovering hidden history and intriguing facts and stories not readily apparent to the casual visitor. Tours are rigorously researched and constantly evolving.Michelle and James's tour business has drawn a loyal following. Their guided talks have been a feature of many academic programs, including the Columbia School of Journalism; the New York School of Law; Siena College in Albany; and Texas A&M's Mays School of Business. Regular clients include Brown Brothers Harriman, Fordham University alumni, the Hofstra University Museum of Art, HF Holidays (one of the UK's top travel agencies), Beyond Times Square (a New York-based travel company), the Consular Women's Club (the wives of U.N. diplomats), Broadway Across America (a national theater tourism agency), along with hundreds of couples, families, corporate groups, and historically minded sightseers in New York.Michelle holds a Bachelor's and two Masters Degrees in Ancient History, Art History, and Archaeology from Columbia University and has taught art history to undergraduates at Columbia and Hunter College, CUNY.Michelle and James have each been quoted as New York City experts in the New York Times, Time Out New York, amNY, the Chicago Tribune, the Australian, and the Associated Press. They have appeared on the Brian Lehrer Show, Peter Greenberg Worldwide Radio, WCBS AM, WFUV's award-winning show Cityscape, and on C-SPAN2's Book TV program. In 2012, James appeared as a New York City expert on Discovery Network's new program Curious and Unusual Deaths. In the past, they have been invited to guest blog at the New York Times on the history of Manhattan and at the Lower East Side Tenement Museum, the city's premiere destination for immigrant history.
Loading...
or
Not Currently Available for Direct Purchase