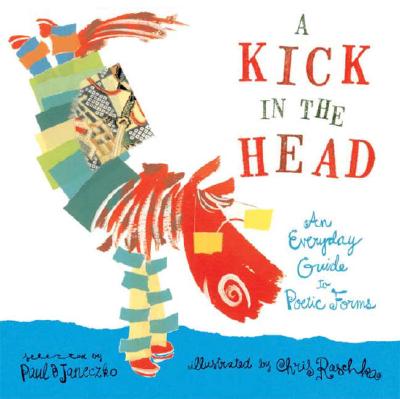 A Kick in the Head

An Everyday Guide to Poetic Forms

From the simplest couplet to the mind-boggling pantoum, the award-winning team behind A Poke in the I shows us the many fascinating ways poetic forms take shape.

Please
Open this book for something
Extraordinary.
Twenty-nine different poetic forms await you
Inside these pages. How many
Can you master?

From sonnets to double dactyls,
Odes to limericks—
Raschka and Janeczko (and a frisky mule)
Make learning the rules of poetry
So much fun!

In this splendid and playful volume, acclaimed poetry anthologist Paul B. Janeczko and Caldecott Honor illustrator Chris Raschka present lively examples of twenty-nine poetic forms, demonstrating not only the (sometimes bendable) rules of poetry, but also the spirit that brings these forms so wonderfully to life. Featuring formal poems, some familiar and some never before published, from the likes of Eleanor Farjeon (aubade), X. J. Kennedy (elegy), Ogden Nash (couplet), Liz Rosenberg (pantoum), and William Shakespeare, the sonnet king himself, A Kick in the Head perfectly illustrates Robert Frost's maxim that poetry without rules is like a tennis match without a net. Back matter includes notes on poetic forms.

Praise For A Kick in the Head: An Everyday Guide to Poetic Forms…

Readers will have the good fortune to experience poetry as art, game, joke, list, song, story, statement, question, memory. A primer like no other.
—School Library Journal (starred review)

This is the introduction that will ignite enthusiasm. The airy spaces between the words and images will invite readers to find their own responses to the poems and encourage their interest in the underlying rules, which, Janeczko says, 'make poetry-like sports-more fun.'
—Booklist (starred review)

A beautiful, beautifully clear celebration of the discipline of poetry—and the possibilities offered by that discipline—this offering will find use both in the hands of eager poets and on the reference shelf.
—Kirkus Reviews (starred review)

Chris Raschka is the illustrator of more than twenty highly praised books for children, including Yo! Yes?, a Caldecott Honor Book; Charlie Parker Played Be Bop; I Pledge Allegiance; A Child's Christmas In Wales; and, of course, A Poke In The I, which was a New York Times Best Illustrated Book.
Loading...
or
Not Currently Available for Direct Purchase