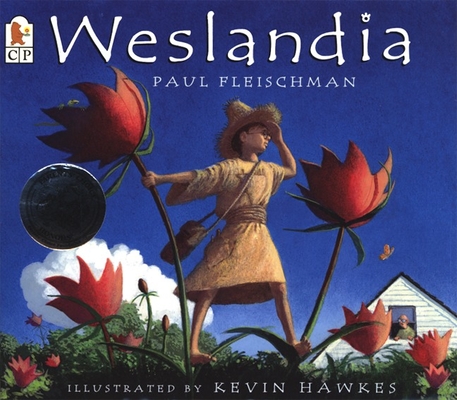 "This fantastical picture book, like its hero, is bursting at the seams with creativity. . . . a vigorous shot in the arm to nonconformists everywhere" — Publishers Weekly (starred review)

Enter the witty, intriguing world of Weslandia! Now that school is over, Wesley needs a summer project. He’s learned that each civilization needs a staple food crop, so he decides to sow a garden and start his own — civilization, that is. He turns over a plot of earth, and plants begin to grow. They soon tower above him and bear a curious-looking fruit. As Wesley experiments, he finds that the plant will provide food, clothing, shelter, and even recreation. It isn’t long before his neighbors and classmates develop more than an idle curiosity about Wesley — and exactly how he is spending his summer vacation.

Wesley is a nonconformist suffering rejection from classmates . . . until he puts his school lessons to use and founds his own civilization—Weslandia . . . Combining the allure of fantasy and science fiction with the dismissal of socially acceptable norms creates a true paradise for today's pre-teen and terrific fodder for social studies classes. At another level, the story works for younger children, who will be drawn to the art and appreciate Wesley's inventiveness, idominitable spirit, and ultimate triumph.
—The Horn Book (starred review)

This fantastical picture book, like its hero, is bursting at the seams with creativity . . . a vigorous shot in the arm to nonconformists everywhere . . . It's difficult to imagine a better pairing than Fleischman and Hawkes to bring this one of a kind kid—and his universe—so vividly to life.
—Publishers Weekly (starred review)
or support indie stores by buying on
Copyright © 2020 American Booksellers Association