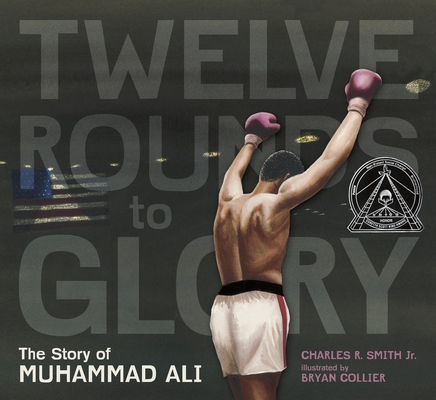 A dynamic author-illustrator team follows the threetime heavyweight champ through twelve rounds of a remarkable life.

From the moment a fired-up teenager from Kentucky won 1960 Olympic gold to the day in 1996 when a retired legend, hands shaking from Parkinson’s, returned to raise the Olympic torch, the boxer known as "The Greatest" waged many a fight. Some were in the ring, against opponents like Sonny Liston and Joe Frazier; others were against societal prejudice and against a war he refused to support because of his Islamic faith. Charles R. Smith Jr.’s rap-inspired verse weaves and bobs and jabs with relentless energy, while Bryan Collier’s bold collage artwork matches every move — capturing the "Louisville loudmouth with the great gift of rhyme" who shed the name Cassius Clay to take on the world as Muhammad Ali.
Back matter includes a timeline.

The text...illuminates the dazzle and daring of Ali, and ultimately the spiritual calm.
—New York Times Book Review

Collier's bold pictures...are among the best of his illustrious career, capturing both nuance and excitement.
—Booklist (starred review)

Smith's honest portrayal of Ali's strengths and flaws results in an impressive testimony to a man who never backed down from his beliefs. A first purchase for any collection looking for strong, well-rounded biographies.
—School Library Journal

This unique and thorough tribute to a complex American hero should readily enthrall those seeking a less conventional biography.
—Publishers Weekly

Twelve Rounds to Glory definitely showcases the myth over the man; but it also provides insight into the nuances of Ali's personality and the racism he fought with words and fists.
—Horn Book

A new picture book with almost as much attitude as its subject...a dense, poetic biography.
—Columbus Dispatch

A challenging book that demands to be read aloud and will be a knockout for sharing.
—Parent Wise Austin

This vibrant, pulsing biography begs to be read aloud.
—The Times-Picayune

Collier's explosive artwork is coupled with 12 rhyming poems that capture the larger-than-life personality of Muhammad Ali and echo those peculiar, taunting rhymes so powerfully ingrained in our boxing, and cultural, lore.
—Booklist, top 10 sports books for youth feature

Bryan Collier is the illustrator of several award-winning books, including Uptown, A Freedom River, Martin's Big Words, and Visiting Langston, all winners of the Coretta Scott King Award (USA). He lives in New York, USA.
Loading...
or
Not Currently Available for Direct Purchase