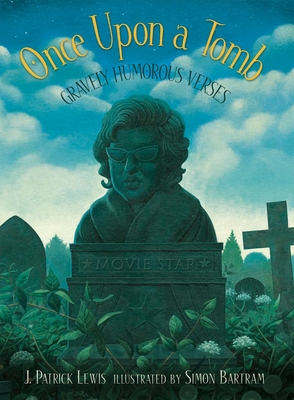 Once Upon A Tomb (Hardcover)

Reader, if I had more time
I’d say au revoir in rhyme,
Sayonara, ciao in verse —
But I have to catch a hearse.

Peek inside Once Upon a Tomb and find twenty-two poems, each of which tells, in hilarious verse, the story of an untimely demise — from a school principal to a bully, a food critic to a cafeteria lady, an underwear salesman to a soccer player. Complemented by Simon Bartram’s deadpan illustrations, J. Patrick Lewis’s cryptic tour of headstones and epitaphs is silly, spooky — and far from grave.

J. Patrick Lewis has written many books for children, including The Last Resort, illustrated by Roberto Innocenti, which was a New York Times Book Review Best Illustrated Children's Book of the Year, and Arithme-tickle an Even Number of Odd Riddle-Rhymes, illustrated by Frank Remkiewicz.

Simon Bartram's humorous acrylic paintings have appeared in several books for children, including Man on the Moon (A Day in the Life of Bob), and numerous magazines. He loves to paint but also enjoys writing and creating his own stories and poems.

Praise For Once Upon A Tomb: Gravely Humorous Verses…