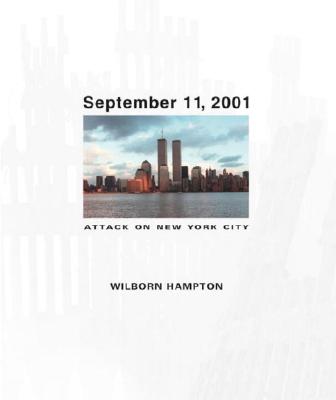 The award-winning Wilborn Hampton recounts one horrifying day in history through the eyes of several people who experienced it firsthand.

A blind man and his dog struggling to escape from the burning North Tower, a company of firefighters risking their lives to help with the evacuation, an ordinary citizen turned rescue worker sifting through debris after the towers collapsed - each of these individuals endured a personal nightmare, and each carries a separate memory.

In SEPTEMBER 11, 2001: ATTACK ON NEW YORK CITY, Wilborn Hampton captures an unprecedented piece of history through interviews and accounts of survivors, heroes, and terrorists. In addition, the seasoned reporter tells his own story, thus bringing to readers the grieving, compassionate voice of a fellow New Yorker who was close to Ground Zero. Amplifying the narrative are fifty-four black-and-white photographs, indelible images of horror and heroism unfolding. The panorama of views Wilborn Hampton presents, following several individuals through September 11 and its aftermath, creates an intimate portrait of life and loss, and a deeper understanding of the events of that tragic day.
Back matter includes a bibliography, a filmography, and an index.

Wilborn Hampton was born in Dallas, Texas, in 1940, and was a reporter for U.P.I. from 1963 to 1979. Since 1979, Wilborn Hampton has worked at the NEW YORK TIMES as an editor and as a theater and book critic. On the morning of September 11, 2001, he was preparing to go to work when two hijacked planes flew into the World Trade Center in New York City. Wilborn Hampton undertook to write the story of that awful day because he felt that "no single event since the attack on Pearl Harbor has so traumatized and galvanized the American people as the attacks on September 11. It seemed important, especially for younger readers who may have questions in years to come about what happened, to try to put on paper an account of what took place in New York City that day. And the only way to begin to understand the horror of what occurred on September 11 was to recount it through the eyes of those who experienced it firsthand."
Loading...
or
Not Currently Available for Direct Purchase