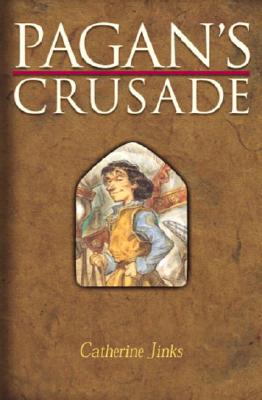 Book One of the Pagan Chronicles

Catherine Jinks spins a colorful tale loaded with action, down-and-dirty details of medieval life, and a healthy helping of sarcasm sure to appeal to teen readers - especially boys.

Down on his luck and kicked in the pants one too many times, sixteen-year-old Pagan Kidrouk arrives on the doorstep of the Templar Knights in medieval Jerusalem, looking for work as a squire. He’s expecting only some protection from the seedier aspects of life on the street and a few square meals. Instead, Pagan finds himself hard at work for Lord Roland de Bram - an exciting life of polishing Lord Roland’s armor, laundering his garments, and even training to fight by his side.

But as the Infidel Saladin leads his army to Jerusalem, it becomes more and more difficult for Pagan and Lord Roland to discern what action to take or whom to trust. Neither Saladin’s army nor the Christian Crusaders offer easy answers. Is a bloody battle for control of the Holy City inevitable?

Catherine Jinks is a medieval scholar and author of young adult books - a background that is evident in this first of four stories about Pagan Kidrouk. Catherine Jinks's books have garnered numerous awards, including the prestigious Children's Book Council of Australia Book of the Year. Pagan grew out of a university course Catherine Jinks took about the Crusades, and her fascination with the real Order of the Templar. She was also heavily influenced by British comedies like MONTY PYTHON AND THE HOLY GRAIL. She didn't expect, however, that she would end up writing four books about Templar squire Pagan Kidrouk. "He was such a strong character," she explains, "that he sprang into my head fully formed, and wouldn't go away until I'd worked out his entire life span. He's certainly the strongest character I've ever written about. The cutest, too, I think."

Peter de Seve, who created the striking die-cut cover for PAGAN'S CRUSADE, is a NEW YORKER cartoonist and the Oscar-nominated designer of animated characters for the feature film ICE AGE.
Loading...
or
Not Currently Available for Direct Purchase