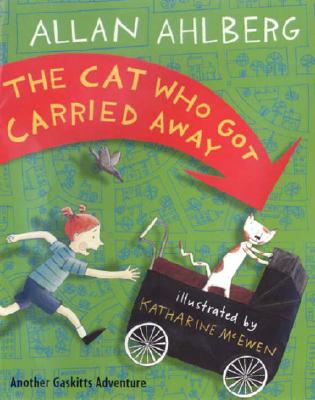 The Cat Who Got Carried Away


In this latest Gaskitts story from comedic master Allan Ahlberg, Gus and Gloria have a lot of running to do. Mr. Gaskitt spends most of his time
vacuuming, Mrs. Gaskitt hardly ever gets out of bed, and Horace - poor Horace - ends up in a pet shop. Tune in for answers to such questions as: Who is that man whizzing by with a baby carriage? Will Horace ever get a role in THE GREAT ESCAPE? And why does Mrs. Gaskitt crave egg and pineapple sandwiches? With Katharine McEwen’s funny illustrations and a few maps and timetables to help them along, early chapter book readers will chuckle their way through this silly story of the ever-surprising Gaskitt family.

Allan Ahlberg, perhaps best known for his Jolly Postman series, is one of the most acclaimed and successful authors of children's books. His other books with Candlewick Press include MONKEY DO!, illustrated by Andre Amstutz; MOCKINGBIRD and THE BRAVEST EVER BEAR, both illustrated by Paul Howard; THE SNAIL HOUSE, illustrated by Gillian Tyler; and two other titles in the Gaskitt family series with Katharine McEwen: THE MAN WHO WORE ALL HIS CLOTHES and

THE WOMAN WHO WON THINGS. Katharine McEwen says, "It's a real pleasure to have illustrated another

book by Allan, as I grew up with his picture books." A graduate in illustration from Kingston University, she is the illustrator of the picture book COWS IN THE KITCHEN by June Crebbin and the Brand New Readers HEY, TABBY CAT! and HERE COMES TABBY CAT by Phyllis

Root, as well as four Sam's Science books.
Loading...
or
Not Currently Available for Direct Purchase