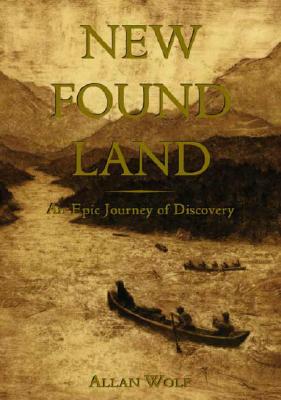 Lewis and Clark's Voyage of Discovery

Follow Lewis and Clark and their crew on a perilous trek through the
uncharted West in this extraordinary debut novel.


I mean to tell you this story the only way I know how. That is to say, I will tell it like a river. It may meander here and there, but in the end it will always find its way to the sea.

Two hundred years ago, Meriwether Lewis and William Clark launched their wooden boats up the Missouri River in search of the illusory Northwest Passage, a journey that would capture the American imagination and help forge a young nation's identity. Now, in a riveting debut novel, Allan Wolf tells the story of this extraordinary voyage through the eyes of not only the famed pair but also several members of their self-named Corps of Discovery. Here, in powerful, lyrical language, is a medley of voices from a surprisingly diverse crew — from the one-eyed French Indian fiddler who pilots the boats to Clark's African American slave; from the young Shoshone woman who has a baby en route to Lewis's Newfoundland dog, a "seer" whose narrative resonates long after the book is closed.

After my eleventh winter

I was kidnapped by our enemies

and made to be their slave.

My people, the Shoshone, were in hiding

in the Shining Mountains

at the place where three rivers become one.

In times of war, we never left the camp unescorted.

watched over my cousin and me.

Split Feather kept lookout from atop his horse

while we two girls crouched by a creek

We were filled with hope. Spring had arrived.

We would soon return to the plains to hunt the buffalo.

Soon there would be skins to cover our tepees.

Soon there would be meat to fill our stomachs.

I was yet a young girl, but a strong one.

Cousin was older and due to marry Split Feather soon.

They brought joy to each other

and their union was a blessing to our family.

Long ago my father had promised me to Sitting Hawk,

I was to become his wife,

but not until I reached womanhood.

Despite our hunger, Cousin and I were always laughing.

That day was no different.

She held her basket, filled with roots, against her stomach.

"I am pregnant with many small children."

Suddenly we heard the sound of the hawk.

It was Sitting Hawk, at watch in the forest,

signaling to the tribe that the enemy was near.

Every bird ceased its singing.

My cousin and I fell silent too.

We were still as the trees.

the high whine of a flying arrow.

his eyes were wide; he died instantly.

The arrow passed through him as if

his body had been river mist.

Cousin ran across the water and vanished

into the woods at the far side of the creek.

I remained crouching by the stream.

Split Feather slumped onto his horse.

His eyes, open in death, watched me.

His body slid to the ground.

A Hidatsa warrior broke through the thicket.

He sat high atop a white horse.

In his left hand he held the rein.

In his right hand he held a long battle club.

He gestured with the club as if to say,

Now bow your head — you are mine.

I remembered the rock in my hand.

And I hurled it.

I managed to hit him between the eyes.

The warrior’s expression was fear and surprise.

But then he smiled.

Blood streamed down his painted face,

across his white teeth.

He licked it from his lips,

As if in a dream I turned, like a doe, to leap

as the warrior on the white horse raised his club

if you were a blackberry,

you could talk your way out of a hungry bear’s mouth.

So I came to Pittsburgh to stay with Uncle Will

while I went to school to study the law.

At least that’s what my mother thinks.

The past few weeks I’ve been working

as an apprentice at the Tarascon Brothers Shipyard.

My plan was to eventually hop on a ship

bound for the open ocean.

I figure I can always become a lawyer later

but for now I want to live a little,

get my feet wet.

Anybody can become a lawyer.

I want to become something special.

I want to accomplish

something that no one else can top.

I want to read my story in the history books.

and then he up and died just like that.

Well, that’s not for me.

Now, today down at the Green Tree Tavern

the boys are all talking about this officer

come to town to have a keelboat built

to sail himself on an expedition of discovery

to explore certain secret stretches of our great country

that no other civilized man has yet seen.

Well, that sounds like the boat George Shannon has been waiting for.

Allan Wolf is a member of the national touring company Poetry Alive!, and is able to recite hundreds of poems from memory. Perhaps it is unsurprising, then, that he chose to write this novel in poetic form. As he says, "During the four years it took to research and write NEW FOUND LAND, my head was constantly crowded with the novel's fourteen voices. They talked to me as I made breakfast, as I dressed the baby, as I delivered newspapers, and as I brushed my teeth. They talked and talked. Alone in my car I began to talk back. And together all fifteen of us worked out the details of the story. Happily, my head is now quiet, the voices having moved to their permanent home within this book." NEW FOUND LAND is Allan Wolf's first novel.
Loading...
or
Not Currently Available for Direct Purchase