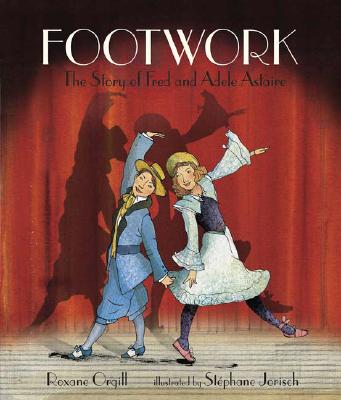 The Story of Fred and Adele Astaire

Follow the footsteps of two persevering siblings who danced their way into a cherished place in the spotlight.

In 1905, four-and-a-half-year-old Fred Astaire put on his first pair of dancing shoes — and from that moment, his life was filled with singing, dancing, and fancy footwork. Fred’s older sister, Adele, was the real dancer, but Fred worked hard to get all the steps just right, and it wasn’t long before he was the one capturing headlines and stealing the show. In this fascinating story of child stars who hoof their way to knockout success on Broadway and beyond, Roxane Orgill and Stéphane Jorisch team up for a bravura performance, capturing the sophistication, fluidity, and grace of two of the biggest names in dance history.

Roxane Orgill is an award-winning writer whose music reviews and articles have appeared in the WALL STREET JOURNAL, the NEW YORK TIMES, and BILLBOARD. She lives in Hoboken, New Jersey.

Stephane Jorisch has illustrated many books for children, including Lewis Carroll's JABBERWOCKY, ANANCY AND THE HAUNTED HOUSE: AN ORIGINAL STORY, and I REMEMBER MISS PERRY. He lives in Montreal.
Loading...
or
Not Currently Available for Direct Purchase