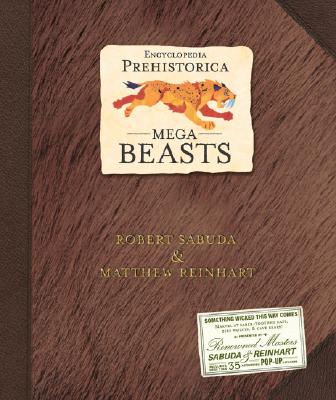 Lions and tigers and bears. . . . Stand back for a beast of a pop-up!Within these dynamic pages lurk fearsome saber-toothed cats, bears taller than basketball hoops, and everyone’s favorite Ice Age giant — the woolly mammoth. Prehistoric Yeti-like mammals, now-extinct birds, and giant flying lizards all come alive in a showcase featuring more than thirty-five astonishing pop-ups. In this third and final volume of the best-selling Encyclopedia Prehistorica series, 3-D masters Robert Sabuda and Matthew Reinhart tackle the titans of the ancient world, awing us with a humbling close-up look at some startling mega-beasts that preceded us on planet Earth.

Robert Sabuda is the co-creator of the first two books in the Encyclopedia Prehistorica series, DINOSAURS and SHARKS AND OTHER SEA MONSTERS. He is also the creator of many other stunning bestselling pop-up books, including AMERICA THE BEAUTIFUL, ALICE'S ADVENTURES IN WONDERLAND, and THE WONDERFUL WIZARD OF OZ. Robert Sabuda lives in New York City.

Matthew Reinhart is the co-creator of DINOSAURS and SHARKS AND OTHER SEA MONSTERS, volumes one and two of the Encyclopedia Prehistorica series. He has also created many other award-winning pop-up books, including CINDERELLA, THE POP-UP BOOK OF PHOBIAS, and ANIMAL POPPOSITES. He lives in New York City.
Loading...
or
Not Currently Available for Direct Purchase