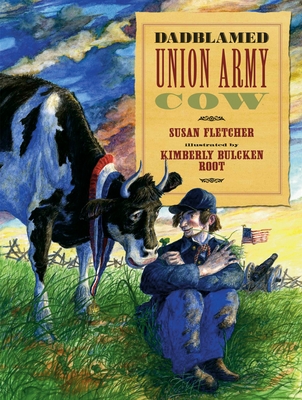 She just won’t git! A Union army soldier can’t shake his dadblamed cow in this uplifting tale based on a true story.

"That dadblamed cow!" She follows her owner into the Union army and then straight on south to fight in the war. She needs unstomped grass to eat, she gets stuck in the mud, and she’s just plain dangerous in battle. But this peculiar cow also gives the weary soldiers some surprising comforts. Based on stories and newspaper reports from the Civil War and full of lively illustrations, this is a heartwarming tale of one wonderfully dadblamed persistent cow.

Kimberly Bulcken Root says that one of her great-grandfathers was in the Pennsylvania cavalry and another in the Grand Army of the Republic, while other relatives were on the southern side. She lives in Quarryville, Pennsylvania.

It's the telling in the soldier's voice that engages the reader and captures just the right tone without caricaturizing or sensationalizing.
—Kirkus Reviews (starred review)
or
Buy Here
Copyright © 2020 American Booksellers Association