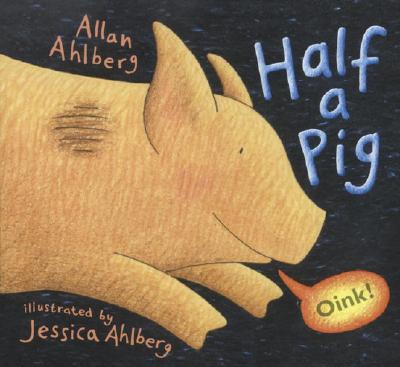 Allan Ahlberg cuts to the chase in this madcap tale illustrated by his daughter, Jessica Ahlberg, in her picture-book debut.

The horrid Mr. Harbottle eats so many sausages he’s beginning to look like one. And now he even has designs on poor Esmerelda, a pig half-owned by the (former) Mrs. Harbottle. In the hands of Allan Ahlberg, this can only mean the chase is on! Featuring the brave young Rose and Billy (still in their pajamas), and peppered with author asides, HALF A PIG is one entirely silly celebration of porcine justice.

Allan Ahlberg is one of the most acclaimed and successful authors of children's books, particularly in partnership with his late wife, Janet, who died in 1994. Perhaps best known for the Jolly Postman series, Allan Ahlberg is also the author of MONKEY DO!, THE SNAIL HOUSE, and THE BRAVEST EVER BEAR.

Jessica Ahlberg is the daughter of Allan Ahlberg. HALF A PIG is her first book.
Loading...
or
Not Currently Available for Direct Purchase