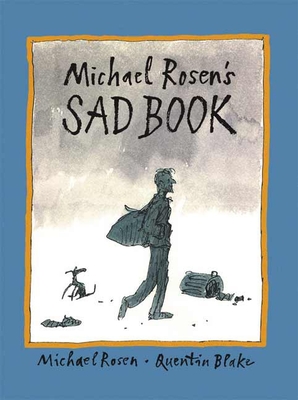 With unmitigated honesty, a touch of humor, and sensitive illustrations by Quentin Blake, Michael Rosen explores the experience of sadness in a way that resonates with us all.

Sometimes I'm sad and I don’t know why.
It's just a cloud that comes along and covers me up.

Sad things happen to everyone, and sometimes people feel sad for no reason at all. What makes Michael Rosen sad is thinking about his son, Eddie, who died suddenly at the age of eighteen. In this book the author writes about his sadness, how it affects him, and some of the things he does to cope with it — like telling himself that everyone has sad stuff (not just him) and trying every day to do something he can be proud of. Expressively illustrated by the extraordinary Quentin Blake, this is a very personal story that speaks to everyone, from children to parents to grandparents, teachers to grief counselors. Whether or not you have known what it's like to feel deeply sad, the truth of this book will surely touch you.

This story is practical and universal and will be of comfort to those who are working through their bereavement. A brilliant and distinguished collaboration.
—School Library Journal (starred review)

Rosen's poetic revelation of his conflicting emotions and coping strategies will resonate with — and help — anyone mourning a loss or dealing with an indefinable sadness.
—Publishers Weekly (starred review)

Rosen offers no easy solutions here — but he and Blake close with the image of a candle shedding a small, hopeful light. Readers . . . will be touched by the honesty and perception here.
—Kirkus Reviews (starred review)

While you may not want to give this to a chid who is at the moment, happy, you would most certainly give this to a child who is sad. It shows them that they are not alone, and does so brilliantly.
—Booklist (starred review)

Michael Rosen is an award-winning author and anthologist of books for young readers, including Shakespeare's Romeo and Juliet, illustrated by Jane Ray, and Shakespeare: His Work and His World, illustrated by Robert Ingpen, which was a School Library Journal Best Book of the Year and one of New York Public Library's 100 Best Children's Books of the Year. In 1997 he received the Eleanor Farjeon Award for service to children's literature. Michael Rosen lives in London.

Quentin Blake has illustrated more than 250 books by many writers, notably John Yeoman, Russell Hoban, Joan Aiken, Michael Rosen, and, most famously, Roald Dahl. He is also well known for his own picture books, such as Clown and Zagazoo. Quentin Blake was a tutor at the Royal College of Art from 1965 to 1988, and for eight of those years was head of the Illustration Department. In 1999 he was appointed the first British Children's Laureate, and in 2002 the Quentin Blake Europe School in Berlin was named for him. He is also a recipient of the Hans Christian Andersen Award for Illustration. Quentin Blake lives in London.
Loading...
or support indie stores by buying on