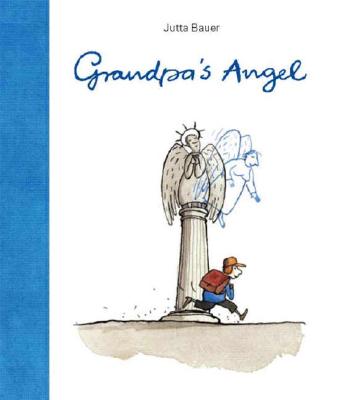 With gentle visual humor, Jutta Bauer's simple story shows how Grandpa's charmed life may be due to someone special watching over him all along.

Grandpa loves to tell stories about his past. There was the time he was almost run over by a bus, the time he made a big dog cower with just one look, and all those scary street corners he passed by unscathed. From climbing the highest trees to surviving World War II and starting a family, Grandpa has led an unusually blessed life. But maybe it was more than mere luck that kept him safe. . . .

Jutta Bauer is a writer, illustrator, artist, and animator who studied illustration at the Fachhochschule für Gestaltung (Higher College of Visual Art) in Hamburg, Germany. In addition to illustrating dozens of picture books, for many years she drew a comic strip for one of Germany's most widely read women's magazines. Grandpa's Angel was first published in Germany in 2001 and was nominated for the Deutscher Jugendliteraturpreis in 2002. It was recently made into a short animated film. Jutta Bauer lives with her son, Jasper, in Hamburg.
Loading...
or
Not Currently Available for Direct Purchase