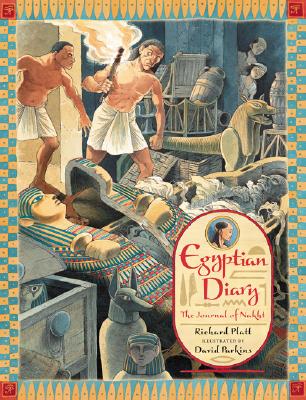 Who is plundering the tombs of ancient Memphis? A brother and sister solve the mystery in this diary full of intriguing details about daily life in Egypt 3,500 years ago.

What was it like to be an aspiring young scribe in Egypt, circa 1500 BC? Picture it through the eyes of nine-year-old Nakht, who has just moved with his family to bustling Memphis, where his father has a prestigious new job. As Nakht takes up his own (often boring) lessons, little does he know that he and his sister, Tamyt, will soon stumble upon a sinister plot involving the robbing of nearby tombs — and will actually catch the high-ranking mastermind at a banquet inside their own house! As a reward, the siblings are invited to the royal palace in Thebes to meet none other than King Hatshepsut, whom they are shocked to discover is a woman — one of few female kings in ancient Egyptian history. Brimming with lively, detailed illustrations and bolstered with endnotes, a timeline, and a glossary, this newest tale from the author of CASTLE DIARY and PIRATE DIARY is sure to stir readers' interest in one of the most fascinating eras in history.

RICHARD PLATT has written more than forty nonfiction books for children. Ever since he first saw the leathery face of a mummy in the British museum, ancient Egypt has fascinated him. EGYPTIAN DIARY: THE JOURNAL OF NAKHT is his third book in the colorful series that includes CASTLE DIARY and the Kate Greenaway Medal winner PIRATE DIARY (both illustrated by Chris Riddell). Richard Platt lives in Kent, England. DAVID PARKINS has illustrated numerous books for children, including WEBSTER J. DUCK, written by Martin Waddell. About EGYPTIAN DIARY, he says, "It can be difficult to make the leap of imagination from the highly stylized Egyptian paintings we see in museums to what daily life was really like. My job was to take these characters and make them believable, to give them expression and personality, and to bring their world to life." David Parkins lives in Lincoln, England.
Loading...
or
Not Currently Available for Direct Purchase