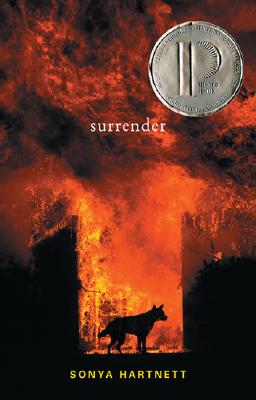 I am dying: it's a beautiful word. Like the long slow sigh of a cello: dying. But the sound of it is the only beautiful thing about it.

As life slips away, Gabriel looks back over his brief twenty years, which have been clouded by frustration and humiliation. A small, unforgiving town and distant, punitive parents ensure that he is never allowed to forget the horrific mistake he made as a child. He has only two friends - his dog, Surrender, and the unruly wild boy, Finnigan, a shadowy doppelganger with whom the meek Gabriel once made a boyhood pact. But when a series of arson attacks grips the town, Gabriel realizes how unpredictable and dangerous Finnigan is. As events begin to spiral violently out of control, it becomes devastatingly clear that only the most extreme measures will rid Gabriel of Finnigan for good.

SONYA HARTNETT is the acclaimed author of THURSDAY'S CHILD, WHAT THE BIRDS SEE, STRIPES OF THE SIDESTEP WOLF, and several other novels - the first written when she was just thirteen. She has won many prestigious awards for her work, including the Guardian Fiction Prize and the Commonwealth Writers Prize. Sonya Hartnett lives in Australia.
Loading...
or
Not Currently Available for Direct Purchase