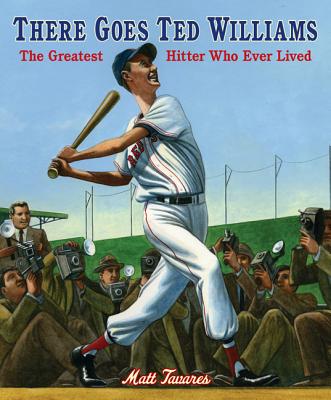 The Greatest Hitter Who Ever Lived

A lively picture book biography of Ted Williams from a master of the genre — just in time for Fenway Park's centennial.

Ted Williams lived a life of dedication and passion. He was an ordinary kid who wanted one thing: to hit a baseball better than anyone else. So he practiced his swing every chance he got. He did fingertip push-ups. He ate a lot of food. He practiced his swing again. And then practiced it some more. From his days playing ball in North Park as a kid to his unmatched .406 season in 1941 to his heroic tours of duty as a fighter pilot in World War II and Korea, the story of Teddy Ballgame is the story of an American hero. In this engrossing biography, a companion to Henry Aaron’s Dream, Matt Tavares makes Ted Williams’s life story accessible to a whole new generation of fans who are sure to admire the hard work, sacrifice, and triumph of the greatest hitter who ever lived.
Back matter includes an author’s note, Ted Williams’s career statistics, and a bibliography.

Praise For There Goes Ted Williams: The Greatest Hitter Who Ever Lived…

Tavares's present-tense narrative lends drama and immediacy to the all-smiles-and-heroics biography, and the watercolor, gouache, and pencil illustrations depict Williams as large as a double-page spread can hold. Published in time for Fenway Park's centennial celebrations, this full-of-life biography will be a hit with young baseball fans.
—Horn Book

This is a glorious tribute to a baseball legend and a complicated human being.
—School Library Journal

Kids will especially like that this wonderful picture book spends a lot of time talking about the childhood of the famous Boston Red Sox slugger... An exciting and inspiring story.
—Washington Post KidsPost

A baseball hero and an American hero, the last player to hit over .400 in a season; here, Ted Williams is introduced to a new generation of baseball fans.
—Kirkus Reviews

Tavares writes THERE GOES TED WILLIAMS like a jazzy poem. There is musicality in every line and in every full-color painting. The nostalgia of the paintings plays beautifully against the straight-up clarity of the prose. It's full of the statistics and details so dear to the hearts of baseball lovers.
—The Boston Globe

Full of movement, the multimedia art is perfect complement to this tale of stellar performance and personal sacrifice.
—San Francisco Chronicle

Matt Tavares is the author-illustrator of Zachary’s Ball, Oliver’s Game, Mudball, and Henry Aaron’s Dream, and the illustrator of Over the River and Through the Wood,’Twas the Night Before Christmas: Account of a Visit from St. Nicholas, The Gingerbread Pirates by Kristin Kladstrup, and Lady Liberty: A Biography by Doreen Rappaport. Matt Tavares lives in Ogunquit, Maine.
Loading...
or
Not Currently Available for Direct Purchase