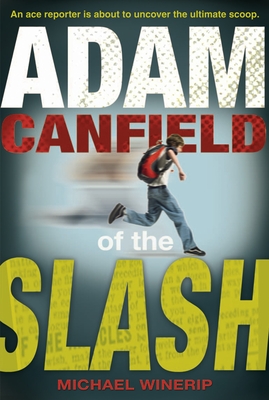 Adam Canfield of the Slash

"Between laughs, readers will be prompted to think — about what constitutes truth, how the media massages it, and the importance of ethics, fairness, and getting the facts right." — Publishers Weekly (starred review)

Adam Canfield has to be the most overprogrammed middle-school student in America. So when super-organized Jennifer coaxes him to be coeditor of their school newspaper, The Slash, he wonders if he’s made a big mistake. But when a third-grader’s article leads to a big scoop, Adam and his fellow junior journalists rise to the challenge of receiving their principal’s wrath to uncover some scandalous secrets. From a Pulitzer Prize-winning author and New York Times columnist comes a funny, inspiring debut that sneaks in some lessons on personal integrity — and captures the rush that’s connected to the breaking of a really great story.

Praise For Adam Canfield of the Slash…

Between laughs, readers will also be prompted to think.
—Publishers Weekly (starred review)

Michael Winerip is the author of two previous novels about Adam Canfield. A Pulitzer Prize-winning reporter and columnist for the New York Times, he lives in Lido Beach, New York.
Loading...
or
Not Currently Available for Direct Purchase