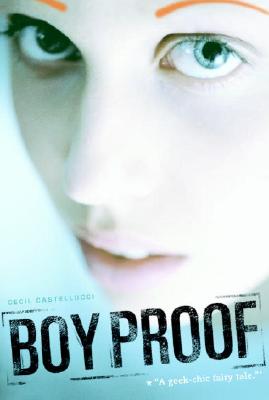 "This novel's funny first-person narrative will grab teens (and not just sci-fi fans) with its romance and the screwball special effects." — Booklist

Meet Egg. Her real name is Victoria Jurgen, but she's renamed herself after the kick-ass heroine of her favorite sci-fi movie, Terminal Earth. Like her namesake, Egg dresses all in white, colors her eyebrows, and shaves her head. She always knows the right answers, she's always in control, and she's far too busy — taking photos for the school paper, meeting with the Science Fiction and Fantasy Club, and hanging out at the "creature shop" with her dad, the special-effects makeup wizard — to be bothered with friends, much less members of the opposite sex. As far as Egg is concerned, she's boy proof, and she likes it that way. But then Egg meets a boy named Max, a boy who's smart and funny and creative and cool . . . and happens to like Egg. Could this be the end of the world — at least as Egg knows it?

Egg's stripped-down, laser-like observations are funny, moving, and at times poetic, creating a fresh voice that will be immediately appealing to readers. This is an affirming story about a girl waking up to her true potential.
—Bulletin of the Center for Children's Books (starred review)

Castellucci effortlessly paints a picture of Hollywood as a setting that shapes her characters as much as they shape it. Egg's journey to shed her trappings and to confidently inhabit her own character is one readers won't want to miss.
—Publishers Weekly (starred review)

This novel's clipped, funny, first-person, present-tense narrative will grab teens with its romance and the screwball special effects, and with the story of an outsider's struggle both to belong and to be true to herself.
—Booklist

With a cover that has teen appeal, this quick, fun read is sure to please the romantic geeks of the world.
—VOYA

It's satisfying to see [Egg] finally reciprocate other people's feelings and concerns for her and realize that being true to herself doesn't mean she has to go it alone.
—The Horn Book

Cecil Castellucci grew up in New York City. She is a writer, a filmmaker, an actress, and a singer-songwriter, and engages in many other creative pursuits. She is also an avid science fiction fan. Currently, Cecil Castellucci lives in Los Angeles, in the "belly of the beast" known as Hollywood. This is her first book with Candlewick Press.
Loading...
or support indie stores by buying on
(This book is on backorder)