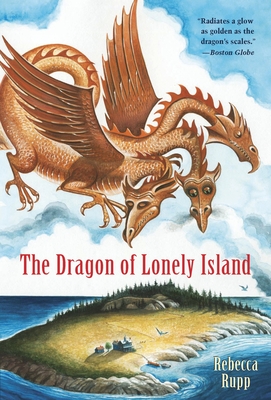 The Dragon of Lonely Island

Hannah, Zachary, and Sarah Emily are spending the summer at their great-aunt Mehitabel's house on faraway Lonely Island. There, in a cave hidden high above the ocean, they discover a fabulous creature: a glittering three-headed golden dragon with a kind heart, an unpredictable temper, and a memory that spans 20,000 years. Transported by the magic of the dragon's stories, the children meet Mei-lan, a young girl in ancient China; nineteenth-century cabin boy Jamie Pritchett; and, in more recent times, Hitty and her brother, Will, who survive a frightening plane crash on a desert island. In this fluidly written novel, Rebecca Rupp explores what three children from the present learn from the past — and from an unlikely but wise and generous friend.

Rebecca Rupp lives in Vermont with her husband and three sons, three cats, and a large garden full of heirloom tomatoes. Of THE DRAGON OF LONELY ISLAND, she says, "We once had an invisible pet dragon named Petunia, plus did an awful lot of childhood reading."
Loading...
or support indie stores by buying on