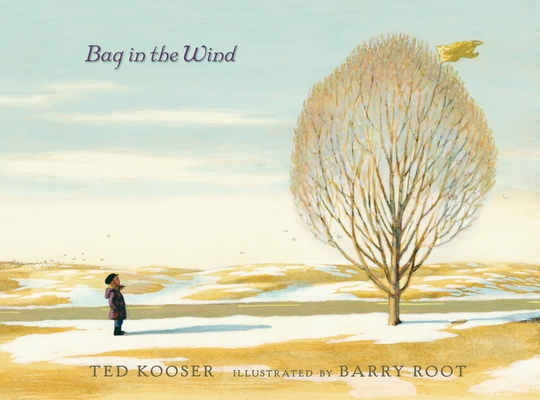 Bag in the Wind

In a singular first children’s book, Pulitzer Prize-winning poet Ted Kooser follows a plastic bag on its capricious journey from a landfill into a series of townspeople’s lives.

One cold morning in early spring, a bulldozer pushes a pile of garbage around a landfill and uncovers an empty plastic bag — a perfectly good bag, the color of the skin of a yellow onion, with two holes for handles — that someone has thrown away. Just then, a puff of wind lifts the rolling, flapping bag over a chain-link fence and into the lives of several townsfolk — a can-collecting girl, a homeless man, a store owner — not that all of them notice. Renowned poet Ted Kooser fashions an understated yet compassionate world full of happenstance and connection, neglect and care, all perfectly expressed in Barry Root’s tender illustrations. True to the book’s earth-friendly spirit, it is printed on paper containing 100 percent recycled post-consumer waste and includes an author’s note on recycling plastic bags.

Praise For Bag in the Wind…

Ted Kooser was the United States Poet Laureate from 2004 to 2006 and won a Pulitzer Prize for his book of poems Delights and Shadows. He is the author of twelve full-length volumes of poetry and several books of nonfiction, and his work has appeared in many periodicals. This is his first children’s book. He lives in Garland, Nebraska.

Barry Root has illustrated many books for children, including The Cat Who Liked Potato Soup by Terry Farish and The Birthday Tree by Paul Fleischman. He lives in Quarryville, Pennsylvania.
Loading...
or support indie stores by buying on