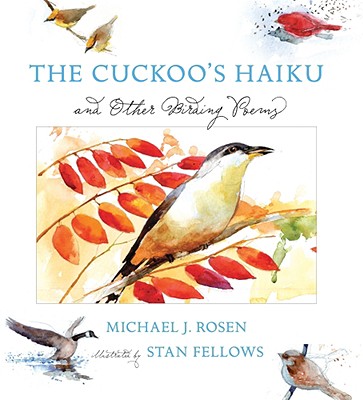 and Other Birding Poems

A joyful primer on the pleasures of bird-watching merges haiku, notes for identifying species, and exquisite watercolor illustrations.

In spare and graceful words, poet and birder Michael J. Rosen captures
the forecasting call of the mysterious cuckoo as well as essential characteristics of more than twenty commonly seen North American birds. This artfully compiled field notebook — enriched by the evocative artwork of watercolorist Stan Fellows — captures the excitement of recognizing a bird, whether a darting kingfisher, a wandering wild turkey, or a chirpy house sparrow.
Back matter includes notes for birdwatchers and haiku lovers.

Michael J. Rosen has written and edited more than sixty books for children and adults, including A DRIVE IN THE COUNTRY and DON'T SHOOT! CHASE R.'S TOP TEN REASONS NOT TO MOVE TO THE COUNTRY. He lives on one hundred forested acres in central Ohio.

Praise For The Cuckoo's Haiku: and Other Birding Poems…

A rare gift for young and old alike, this exquisite book about birds combines delicate verses and stunning watercolors that celebrate the natural world…Text and images, like a well-rehearsed duet, balance and echo each other's beauty.
—Publishers Weekly (starred review)