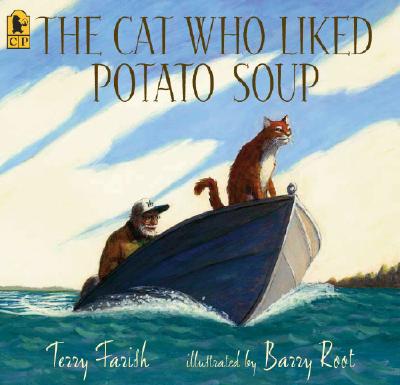 The Cat Who Liked Potato Soup

There was an old man, an ol’ Texas boy, who lived with an uppity old cat -- a cat who’d rather eat potato soup than catch blackbirds, a cat who liked to sit on the bow of the old man’s fishing boat like she was a hood ornament. "Fool cat," the old man would say. "You ain’t nobody’s prize." But when the unexpected happens, they both learn that even the most cantankerous love can lead to acts of heroic proportions. With down-home language that’s a joy to read aloud, Terry Farish tells a wry love story about an unlikely pair of curmudgeons, brought to life in glowing illustrations by Barry Root.

Terry Farish is the author of several young adult novels. She says of THE CAT WHO LIKED POTATO SOUP, "This story began in the kitchen of our old-timer neighbor, Jimmy Fowler. My daughter and I were visiting with him there, gossiping about some village cat or other. Jimmy didn't have a cat, but he said if we got one, wouldn't we name it after him? And we did . We got a cat and named her Jimmy."

Barry Root is the illustrator of many books for children. He says, "I've always been pro-cat, although our house is divided on the subject. To appreciate a cat requires a certain amount of abstraction, I think - and a sense of humor." Barry Root lives in rural Pennsylvania with his wife (the illustrator Kimberly Bulcken Root), their three children, and a couple of useless dogs.
Loading...
or
Not Currently Available for Direct Purchase