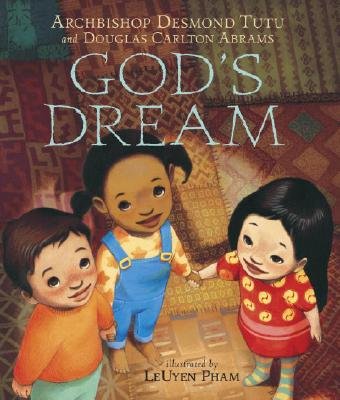 With warmth and humor, Archbishop Desmond Tutu distills his philosophy of unity and forgiveness into a picture book for the very young.

Archbishop Desmond Tutu was awarded the Nobel Peace Prize in 1984 for his lifelong struggle to bring equality, justice, and peace to his native country of South Africa. He also served as Archbishop of Cape Town, South Africa, from 1986 until 1996. In 1995, former South African President Nelson Mandela asked him to lead the Truth and Reconciliation Commission, which became a model of national forgiveness and coexistence. He is currently the chairperson of the Elders, an international group charged with helping to end conflicts and solve global problems. Archbishop Tutu's most recent book is God Has a Dream: A Vision of Hope for Our Time. He lives with his family in South Africa.

Douglas Carlton Abrams is the coauthor with Archbishop Desmond Tutu of God Has a Dream: A Vision of Hope for Our Time. He is also the cofounder of Idea Architects, a book and media development agency working with visionary authors to create a wiser, healthier, and more just world. He lives with his family in California.

LeUyen Pham is the author and illustrator of Big Sister, Little Sister and has illustrated many other books for children, including Freckleface Strawberry by Julianne Moore and the New York Times bestseller Grace for President by Kelly DiPucchio. About God's Dream, she says, "Being a part of this book has been an extremely significant experience for me, considering that I left war-torn Vietnam during the fall of Saigon when I was only a year old. My son was also born during the creation of this book, bringing the lovely message of hope and love full circle." LeUyen Pham lives in San Francisco with her family.
Loading...
or
Not Currently Available for Direct Purchase