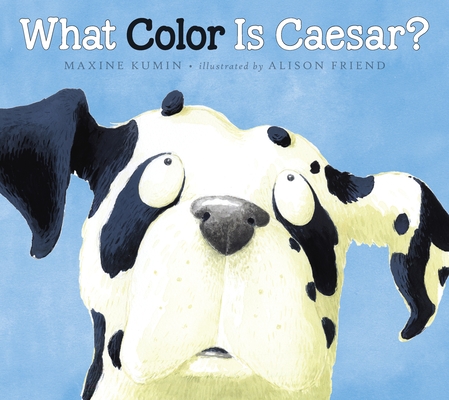 What Color Is Caesar? (Hardcover)

One dog’s quest for self-definition is anything but black and white in this delightfully droll, enlightening tale by an acclaimed former poet laureate.

Caesar is a large white dog with a great many black spots. Or is he a large black dog with even more white spots? That’s the trouble: he doesn’t know which, and though nobody in the family seems to care, he won’t rest until he uncovers the truth. So off he traipses, beseeching one animal after another to find out what color he is, basically. From celebrated poet Maxine Kumin comes a doggedly quizzical hero, brought comically to life by Alison Friend’s expressive watercolors — a lovable picture-book character who ultimately learns that it’s not what’s on the outside that counts.

Maxine Kumin is a Pulitzer Prize–winning poet who has served as both the Consultant in Poetry to the Library of Congress (a post later renamed the Poet Laureate of the United States) and the Poet Laureate of New Hampshire. In addition to her numerous books of poetry, she has also written novels, essays, and beloved children’s books. She lives in Warner, New Hampshire.

Alison Friend’s sweet and funny watercolors of animals have been featured on greeting and holiday cards. This is her first picture book. She lives in South Yorkshire, England.
or
Not Currently Available for Direct Purchase
Copyright © 2020 American Booksellers Association