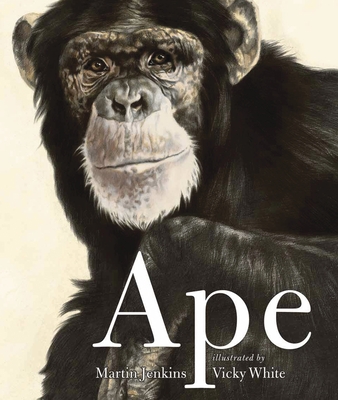 With compelling illustrations and a conservationist slant, this look at four rare great apes — and one very familiar one — is a book to go ape over.

Swing with a hairy orangutan and her baby as they lunge for a smelly, spiky durian fruit. Roam and play with a gang of chimps, then poke out some tasty termites with a blade of grass. Chatter and feast on figs with a bonobo, or chomp on bamboo with a gorilla as he readies for sleep. What could be better than spending time with these rare and wonderful creatures — after all, the fifth great ape on this planet is you!
Back matter includes an index and a map.

Martin Jenkins, a conservation biologist, has written several nonfiction books for children, including Grandma Elephant's in Charge, The Emperor's Egg, and Chameleons are Cool. He lives in Cambridge, England.

Vicky White worked as a zookeeper for several years beore earning an MA in natural history illustration from London’s Royal College of Art. Ape is her first picture book.

What seems to matter for White is making an intense emotional connection between subject and reader. And she succeeds—the great apes have found their John Singer Sargent.
—Publishers Weekly (starred review)
or support indie stores by buying on
(This book is on backorder)
Copyright © 2020 American Booksellers Association