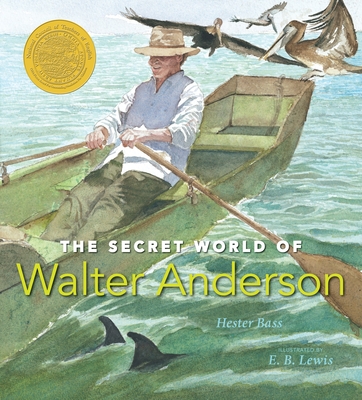 The Secret World of Walter Anderson

Residents along the Mississippi Gulf Coast thought Walter Anderson was odd, rowing across twelve miles of open water in a leaky skiff to reach Horn, an uninhabited island without running water or electricity. But this solitary artist didn’t much care what they thought as he spent weeks at a time on his personal paradise, sleeping under his boat, sometimes eating whatever washed ashore, sketching and painting the natural surroundings and the animals that became his friends. Here Walter created some of his most brilliant watercolors, work he kept hidden during his lifetime. In a beautifully crafted picture book biography, writer Hester Bass and Caldecott Honor-winning illustrator E. B. Lewis pay homage to an uncompromising American artist.
Back matter includes a bibliography.

Praise For The Secret World of Walter Anderson…

Hester Bass won an Orbis Pictus Award for Outstanding Nonfiction for Children for the The Secret World of Walter Anderson, and is also the author of the picture book, So Many Houses, illustrated by Alik Arzoumanian, and Seeds of Freedom: The Peaceful Integration of Huntsville, Alabama, illustrated by E. B. Lewis. Formerly residing in Huntsville, she now lives in Santa Fe, New Mexico.

E. B. Lewis is the illustrator of more than thirty books for children. Among his many honors are a Coretta Scott King Medal for Talkin’ About Bessie: The Story of Aviator Elizabeth Coleman by Nikki Grimes, as well as three Coretta Scott King Honor awards. He lives in New Jersey.
Loading...
or
Not Currently Available for Direct Purchase