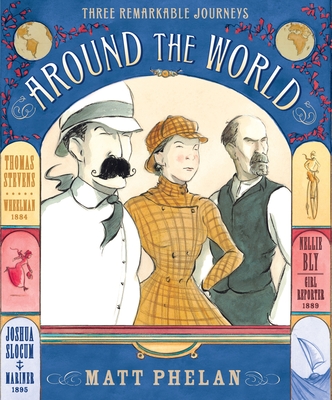 Around the World (Hardcover)

“Phelan's Around the World, though fiction, is grounded in historical fact and quotes from primary sources, proving an exciting base for history lessons or a path to the exploration of nonfiction. Three famous individuals are presented, each of whom circumnavigated in the world in his or her own way: Thomas Steves by bicycle, Nellie Bly by ship and rail, and Joshua Slocum by sail boat. The pacing and speed of each journey is captured by the graphic novel layout, which combines text, image, maps, and other materials, each adding a layer to the reader's understanding. Sprightly line drawings and colorful washes capture the emotion and drive of each character, bringing a rush of thrilling speed to each adventure.”
— Marika McCoola, Odyssey Bookshop, South Hadley, MA
View the List

As the nineteenth century wound down, a public inspired by the novel Around the World in Eighty Days clamored for intrepid adventure. The challenge of circumnavigating the globe as no one ever had before—a feat assuring fame if not fortune—attracted the fearless in droves. Three hardy spirits stayed the course: In 1884, former miner Thomas Stevens made the journey on a bicycle, the kind with a big front wheel. In 1889, pioneer reporter Nellie Bly embarked on a global race against time that assumed the heights of spectacle, ushering in the age of the American celebrity. And in 1895, retired sea captain Joshua Slocum quietly set sail on a thirty-six-foot sloop, braving pirates and treacherous seas to become the first person to sail around the world alone. With cinematic pacing and deft, expressive art, acclaimed graphic novelist Matt Phelan weaves a trio of epic journeys into a single bold tale of three visionaries who set their sights on nothing short of the world.

Matt Phelan is the author-illustrator of the highly acclaimed and award-winning graphic novel The Storm in the Barn. He is also the illustrator of many books for young readers, including Always and I’ll Be There by Ann Stott and The Higher Power of Lucky by Susan Patron, winner of the 2007 Newbery Medal. He lives in Philadelphia.

Praise For Around the World…

A first-rate pleasure from the acclaimed graphic novelist Phelan. And this book — riveting, wondrously drawn, expertly paced — is a triumph in and of itself.
—The New York Times

With uncommon perception and a flair for visual drama, Phelan tracks three intrepid souls' solo journeys around the world...Three true tales of adventure as grand and admirable in the telling as they were in the doing.
—Kirkus Reviews (starred review)

A graphic novel that will appeal to aficionados of the form and any reader in search of engrossing true journeys.
—School Library Journal (starred review)

Phelan invests each tale with its own distinct mood and style.
—Bulletin of the Center for Children's Books (starred review)