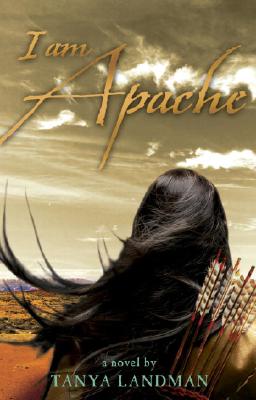 I Am Apache (Hardcover)

A young woman seeks to avenge her brother's death by becoming an Apache warrior — and learns a startling truth about her own identity.

After watching helplessly as Mexican raiders brutally murder her little brother, fourteen-year-old Siki is filled with a desire for vengeance and chooses to turn away from a woman's path to become a warrior of her Apache tribe. Though some men, like envious Keste, wish to see Siki fail, she passes test after test, and her skills grow under the guidance of her tribe's greatest warrior, Golahka. But Keste begins to whisper about Siki's father's dishonorable death, and even as Siki earns her place among the warriors, she senses a dark secret in her past — one that will throw into doubt everything she knows. Taking readers on a sweeping and suspenseful journey through the nineteenth-century American Southwest, Tanya Landman draws on historical accounts to imagine the Black Mountain Apache as a tribe in a fight for survival against the devastating progress of nations.

Tanya Landman runs the Storybox Theatre in England and is known there for her many books for children. I Am Apache is her first book for older readers. She lives in Devon, England.

Praise For I Am Apache…

"A magnificent account of life in a doomed tribe on the Mexican border
towards the end of the nineteenth century: a disturbing but exhilarating
experience." — THE INDEPENDENT (U.K.) — Independent, The (UK)
or
Not Currently Available for Direct Purchase
Copyright © 2020 American Booksellers Association