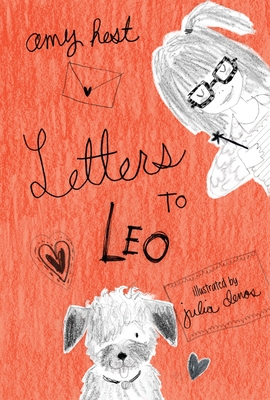 The joys and trials of fourth grade — and of life with her father now that her mother is gone — play out in charming letters from Annie to her dog, Leo.

Annie Rossi never, ever thought her father would let her have a dog. But now that he’s finally given in, she’s found the perfect ear for the stories of her day. She just writes them in a notebook hidden under the bed and reads them to Leo in her soft night voice, like the one her mother used when reading to Annie at bedtime before she died. And Annie sure has a million stories to tell! There’s mean Edward, who brags about his “noble goldfish” and gets her in trouble for accidentally lobbing a volleyball into his nose. There’s her best friend, Jean-Marie, who ups and moves to New Jersey (and wants to borrow Leo for company!). There’s the poem Annie writes about her mom, which Miss Meadows asks her to read for the class. And there’s her professor dad, who is finally coming out of his shell, even though he is an elderly forty-year-old with a serious personality. Genuine and funny, Amy Hest’s first-person narration revisits a winning young character as she takes on a new year — and a new dog — with humor, honesty, and resiliency.

Praise For Letters to Leo…

Annie, first introduced to readers in REMEMBERING MRS. ROSSI (Candlewick, 2007), lives with her dad in New York City and is now in fourth grade. Her new best friend, a floppy-haired puppy named Leo, is helping her cope with schoolwork, an icky boy, and a best friend who is moving away. She writes letters to him, and reads them to him at night...Upbeat and chirpy, and decorated with lots of kid-style illustrations, LETTERS TO LEO evokes empathy with a light touch.
—School Library Journal (starred review)

In Annie, readers will find a perfectly imperfect Model Citizen, a loving daughter and good friend—in other words, someone a lot like them.
—Kirkus Reviews

Hest does a charming job making Annie (and Leo!) come alive through a series of letters and drawings... Ready-made for reluctant readers, who will be enticed by the art-heavy format and the short bursts of text, this book will also be a good choice for fans of Sara Pennypacker’s Clementine series or the Judy Moody books.
—Booklist

Middle graders will enjoy watching Annie grow up as a friend and a daughter.
—The Horn Book

Abundant humorous illustrations and the epistolary format make this an ideal choice for kids just starting to embark on chapter books, and its message of healing is salve for all ages.
—Shelf Awareness

In funny, insightful and charming notes, "Letters to Leo" captures the best and worst of life in the fast lane of elementary school. It's also small enough to sneak into a duffel bag for camp, without the tell-tale book bulge.
—Huffington Post Parents blog

Amy Hest, the author of many award-winning books for children, is a three-time recipient of the Christopher Medal and a winner of the Boston Globe–Horn Book Award. She lives in New York City.